With more than 2,000 people known to have died from the recent Ebola outbreak in West Africa, and the numbers still rising, many in the UK are understandably concerned about the virus spreading to these shores. But are they right to be? Dr Peter Barratt, technical manager, Initial Washroom Hygiene sheds light on this issue 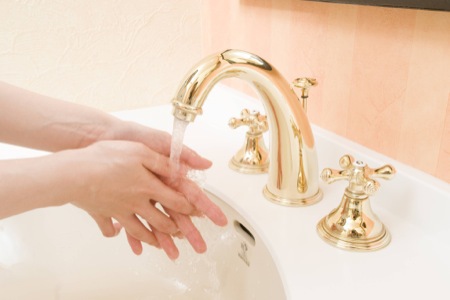 Whilst Ebola causes a very dangerous condition (with a mortality rate of 90% if left untreated) it is unlikely to be a cause of infection which could lead to a global pandemic, for the simple reason that it has been identified early, and measures have been put in place to reduce the chances of further cross infections. Other less harmful microbial infections can be equally contagious as, if not more so, than Ebola, but a lot of the key actions to stop cross infection still applies.

Ebola is a virus that normally resides harmlessly in bush meat, such as bats and monkeys. In order for it to be transmitted to humans, there normally needs to be direct contact with the body fluids of these animals. Once inside the human body, it has an incubation period that can last from two days to a few weeks, during which it can be passed to other humans. This transmission via direct contact through bodily fluids makes the potential spread of Ebola comparatively low compared with some other diseases.

On the other hand, very contagious infections, such as Norovirus and the common cold, whilst not normally deadly, are often passed from person to person through indirect contact; for example via an infected person’s environment or personal belongings. This comparative ease of transmission tends to make them much more prevalent.  However, simple hygiene steps such as regular hand washing are often one of the most effective ways of preventing their spread.

Here are five examples of microbe-borne illnesses that are, in fact, easier to contract than Ebola, and some ways to avoid them:

This is also known as the winter vomiting bug and came to our attention in recent years after some significant outbreaks in the UK. Each year it is estimated that between 600,000 and 1 million people in the UK catch Norovirus. Norovirus is spread through indirect contact (through the air or via a surface), as well as directly, but the infectious dose is extremely low, meaning it can spread quickly and affect a large number of people in a short space of time.

The respiratory illness known as ‘flu’ can be caused by a number of different viruses of the influenza type and is more common in the winter months. Transmission of flu is either through microscopic droplets as a result of coughing/sneezing, or by direct or indirect nasal, oral or eye contact with hands or surfaces carrying the virus. These methods of transmission highlight the importance of hand washing and hygiene in preventing the illness.

Gastroenteritis is a broad term for a number of viral and bacterial infections of the intestinal tract. Some common causal microorganisms include Campylobacter and rotaviruses. Gastroenteritis is rarely fatal, and commonly clears up within three to five days from the onset of symptoms. It is thought that almost every child will have at least one episode of gastroenteritis before the age of five.

The virus is transferred to food/objects if the infected person does not wash their hands properly after visiting the toilet. As it can be prevalent amongst children, it is vital that parents teach their children the importance of proper hand washing from an early age.

Listeriosis is an example of a specific type of ‘food poisoning’ and is caused by the bacterium Listeria. As with many of the illnesses mentioned so far symptoms usually pass within three days. However, in very rare instances, when the bacteria multiply within the body and cause more harm, Listeria can be fatal.

Listeria bacteria are able to grow in a variety of foods, under a wide range of conditions, and so the food industry is very careful to practice good food and hand hygiene to avoid the risk of Listeriosis.

In recent years, strains of highly antibiotic-resistant bacteria have been found in the UK and have sparked a growing concern over the threat of ‘superbugs’.

The most well-known of these is probably MRSA (Methicillin-resistant Staphylococcus aureus), outbreaks of which are typically found in hospitals. The illness associated with these bacteria usually develops in post-operative patients, but it can also be transmitted to visitors and hospital staff, which is why rigorous hygiene inside the hospital is extremely important.

Looking at the array of ‘nasties’ above, it is advisable to think of hand washing as a health and survival skill. In all of these cases, one of the most effective ways of preventing the spread of the illness is through proper hand washing. Promoting good hand hygiene standards at home and work will significantly reduce the risk of you catching these easily transferred diseases – encouraging this practice can reduce illness by 30-50% within a business environment.

Personal items, such as phones, handbags and computers come into regular contact with our hands, creating a high risk of cross-contamination and spreading germs from one surface to another. It is recommended that when we wash our hands, we wash them for approximately 30 seconds at a time – the same length of time it takes to sing happy birthday twice!

The news of the Ebola breakout is shocking and one that cannot be ignored. Whilst the chances of contracting the virus here in the UK is almost zero, it does point to the power of microorganisms to conceal themselves in the environment and suddenly re-emerge to cause illness where hygiene has been compromised. It is a reminder that there are all sorts of  illnesses that we are much more likely to expose ourselves to if we don’t enforce correct hygiene practices, and a little extra care in hand and surface hygiene can go a long way to protecting ourselves against those risks.