Initial Washroom Hygiene has set a new world record for swabbing the most hands and personal items in one hour. 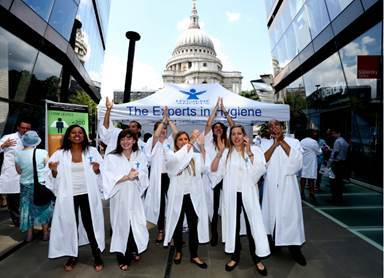 At the event itself, 56 of the 234 members of the public who offered to have their hands analysed were found to be carrying potentially high levels of bacteria, which could indicate the possibility for a high risk of cross-contamination.

Named ‘Hygiene Angels’ the pop-up was set up to encourage effective hand hygiene and educate the public on how to keep their hands clean. It is recommended that hands are washed for approximately 30 seconds (the time it takes to sing Happy Birthday twice through), however pre-event research carried out by Initial Washroom Hygiene of 2,000 UK adults found that 30% believe they only need to wash their hands for 15 seconds or less. Almost a quarter, (24%), of the people surveyed admitted they either rarely or never wash their hands after blowing their nose and 27% don’t after travelling on public transport.

Dr Peter Barratt from Initial Washroom Hygiene commented: "Whilst the World Record attempt was just a bit of fun, we need to learn from this activity and ensure that we take more responsibility to improve hand hygiene. Although our hands bring us into contact with many things, people are sometimes unaware that they are carrying potentially high levels of bacteria on their hands, which could spread nasty infections; both to themselves and to others.

"Personal items, such as phones, handbags and laptop computers come into regular contact with our hands, creating a high risk of cross-contamination and spreading germs from one surface to another. Employers need to ensure the right facilities are available to allow thorough hand washing as well as providing plenty of soap, hand drying equipment, and sanitising gels."