Restricting the spread of bacterial contamination is an essential part of the hygiene regime of any washroom, however, it often easier said than done. 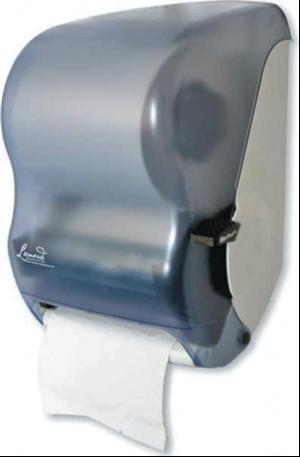 Restricting the spread of bacterial contamination is an essential part of the hygiene regime of any washroom, however, it often easier said than done.

Freshly washed hands may still harbour some bacteria which can be transferred to the towel dispenser and other parts of the facility such as taps and door handles.

Though the hygienic efficiency of paper towels is not disputed, keeping the dispensers clean is an issue.

Dispensers such as those in the Connect Leonardo range are designed with a smooth, rounded surface and can be easily cleaned and maintained.

Connect has also looked at other ways to try to improve hygiene.

On the Leonardo Lever Control dispensers, all levers have been embedded with Bio-Pruf a powerful microbe growth inhibitor which lasts the lifetime of the product. It inhibits microbial growth before it reaches problematic levels.

In the most hygiene sensitive areas, touchless dispensing is the way forward.

The Leonardo range has three dispensers, two are battery operated and one dispenses mechanically upon pulling of the towel. All present the towel flat.
MORE FROM THIS COMPANY