Disposables UK, which manufactures and distributes paper disposables and associated cleaning and hygiene products for the ‘away from home market’, has revealed further details of its presence at ISSA/INTERCLEAN. 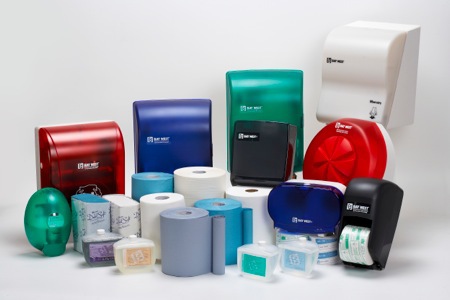 The company will use the show as the main platform for the launch of a new product range. Disposables UK’s custom built stand will display the new Bay West Impressions luxury range, which includes luxury micro-embossed toilet tissues and hand towels made on the company’s new £1.7m production line. Disposables UK’s Ecolabel accredited products will also be on show.

This year’s show comes at a key time for Disposables UK, as the company continues to drive forward its European expansion plans following a successful 2013. The family-run business, which currently operates in the Netherlands, Denmark and France, plans to expand into new areas in 2014, including Germany, Sweden and Eastern Europe.

European business manager Glen Staddon will be on the Disposables UK stand throughout the show to demonstrate the quality of the new and existing products.

He said: "INTERCLEAN is a pivotal event for us in terms of showcasing our new product range and in helping us to strengthen our European distribution network. We’re keen to talk to visitors about the benefits of becoming a Bay West distributor and look forward to welcoming them to our stand.”