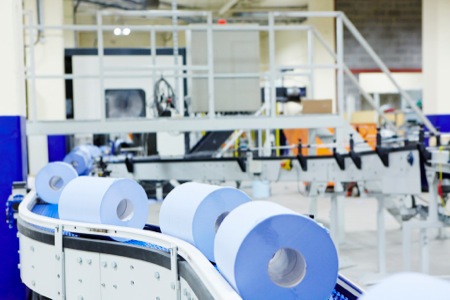 The family-run business has seen a year on year sales increase of 9% with turnover rising to £17m, putting it on track to meet its £18m target for 2014 and driving forward its ambitious five year growth plan to increase turnover to £30m by 2018.

The company paved the way for success with the introduction of a new £1.7m production line which has enabled it to produce quality, laminated products and expand its product portfolio and its reach into new markets. Added to this, the Bay West brand continues to be a star performer, achieving double-digit growth figures for the past three years running.

The company, one of the largest employers in the area, was previously based across four sites totalling 107,000 sq ft. The strategic move to larger premises allowed Disposables to consolidate its operations and provide a faster turnaround time on producing goods, allowing the company to deliver even better customer service. The move, which cost in the region of £850,000, has delivered a new factory, faster production line and brand new offices.

Commenting on this year’s achievements, David Burkill, managing director of Disposables, said: "The move to our present site a year ago was an important step and a key investment in the strategic development of the company. Our state of the art facilities – both production wise and customer-facing – mean that we are ideally placed to take our business to the next level. We’re already reaping the benefits in terms of growth and our standing in the market. Our aim as we move forward across the coming year will be to build on that as well as opening up new markets in the UK and Europe."

He continues: "We’ve also enjoyed some great successes over the last 12 months, including winning Business of the Year at the 2013 Huddersfield Examiner Business Awards, and achieving our internal goal of becoming 100% recyclable with zero waste going to landfill. We have a great team, and the successes of the past year are testament to their hard work and commitment."