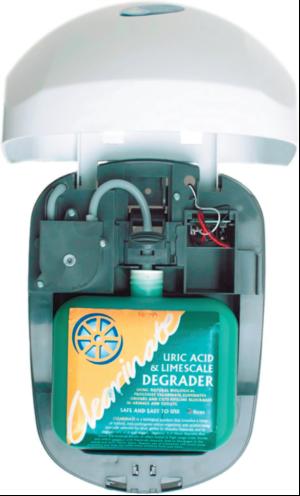 Instead of using traditional chemicals to blast smells, blockages and build ups in urinals,Clearinate uses a blend of friendly bacteria to breakdown the uric acid found in urine. Harmless bugs in the biologically active liquid thrive on this organic build up and dissolve it. Once washed away the urinal is left clean and smelling fresh.

Paul Pringle, buildings manager at Barracuda Group commented: "Most of our pubs are newer but we trialled Clearinate in a couple of our older pubs with great success and have recommended it to our managers.The staff just spray it on the tiles at the end of the night.The smells went after about two weeks and never returned." Dr Tony Brooke, scientist at CBIO explains how Clearinate also has zero impact on the environment:"Clearinate combines naturally occurring micro-organisms with cleansers which enhance the cleaning effect. It's more effective, cheaper and also completely biodegradable.

"The usual treatment for smelly toilets is a strong dose of chemicals, which is expensive, bad for the environment and doesn't get rid of the problem.Often the harsh synthetic smells can be as bad at those they're masking. The biggest mistake I see is businesses using cleaning products containing strong acids, alkalis or bleach which destroy the good bacteria in microbiological systems and degrade the gel in barrier systems."
MORE FROM THIS COMPANY
Send Enquiry
View Company Profile
RELATED ARTICLES