There's no time to waste 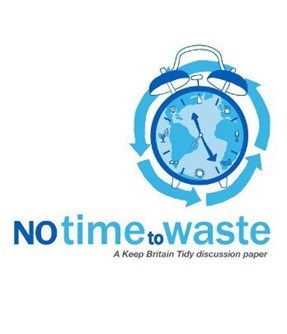 Keep Britain Tidy is best known for its work on litter. However, since its merger with the charity Waste Watch, it has been increasingly working on waste and natural resource challenges.

The UN recently estimated that global consumption of natural resources will almost treble by 2050 unless nations take ambitious steps to reduce consumption. Keep Britain Tidy believes this is possible and No Time to Waste begins to outline the charity's thinking on what needs to be addressed and how.

The discussion paper highlights a series of resource and waste challenges facing the UK and globally, and six solutions that Keep Britain Tidy believes government, businesses and people need to work together on to become more resourceful: -

• Wastefulness remains the order of the day
Almost 15 million tonnes of food is thrown away in the UK every year.

• Value within reuse is lost every day
Electrical items taken by the public to recycling sites would alternatively have a reuse value of approximately £220 million.

• Recycling is flatlining
England is at risk of missing its legally-binding household recycling target of 50% for 2020, as the annual rate of increase in recycling has been slowing to 0.2% over the past three years.

• We are not measuring the right things
For example in England we still only measure recycling collected and not what is actually recycled or its environmental benefit.

• Wealth does not equal happiness
In the UK, the percentage of people reporting themselves ‘very happy’ declined from 52% in 1957 to 36% in 2009, even though real incomes have more than doubled.

• Demand for resources continues to rise
The UN estimated that global consumption of natural resources will almost treble by 2050 unless nations take ambitious steps to cut back consumption.

"Clear evidence shows that we are living beyond our means on a planet, using resources we will never be able to replace. We, governments, businesses and people urgently need to change our ways to stop being wasteful and shift as a nation to become resourceful. No Time to Waste offers our first contribution as a charity to this debate and we welcome views and suggestions as our strategy to end waste develops.”