Stevenage Borough Council has achieved a 29.4% reduction in dog fouling in five months after signing up to Keep Britain Tidy's ‘We’re watching you’ dog fouling campaign and displaying posters of glow-in-the-dark eyes. 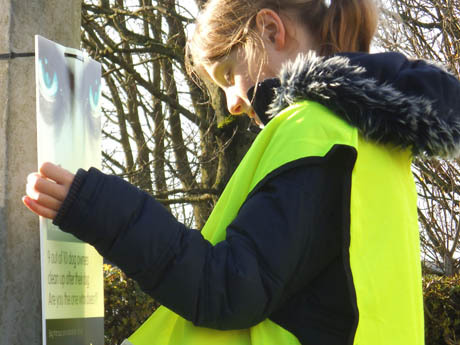 The council is one of 55 land managers to implement the campaign, which has set its sights on irresponsible dog owners after recent research showed that dog walkers are more responsible, and pick up after their dogs, when they think that they are being watched.

Research suggested that dog fouling tends to occur at night time and during the winter months, as some dog owners feel that they can’t be seen ‘under the cover of darkness’.

The ‘We’re watching you’ sign series, featuring a pair of angry-looking eyes, are visible after dark and use cutting-edge materials that ‘charge up’ during the day to glow in the dark at night. This is said to be the first time such a material has been used on a campaign sign.

Stevenage Borough Council displayed 40 of these signs in nine hotspot areas for dog fouling, between November 2014 and March 2015, and monitored the areas for the amount of dog poo before and after the signs went up.

The signs were displayed in three hotspots each for four weeks and the sites were monitored for fouling twice before and twice during. The signs overall achieved a 29.4% reduction, with some hotspots experiencing reductions of over 60%.