New figures released by WRAP report that UK supermarkets gave out a staggering 8.5 billion single-use plastic bags in 2014 – an increase of two hundred million from the previous year. 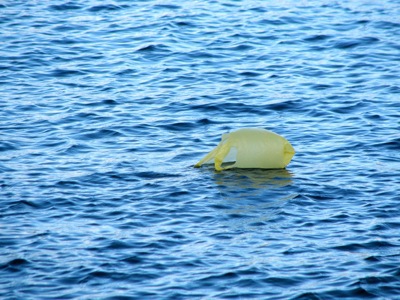 Plastic bags can take 10-20 years to fully decompose and around 8 million tonnes of plastic ends up in our oceans worldwide each year, polluting our marine environment and harming sea life.

Keep Britain Tidy’s annual Local Environmental Quality Survey of England (2014) found littered supermarket bags and retail bags on over one in ten survey sites – that’s three times as many sites as the charity found them on five years ago. (The survey monitors 7000 sites).

Speaking on behalf of the Break the Bag Habit Coalition, Keep Britain Tidy chief executive Richard McIlwain said: "The figures released are undeniable evidence of why the introduction of a carrier bag charge is so crucial in England.

"With bags choking our rural, marine and urban areas, it is great that the Government has sought to put a solution in place in England to substantially reduce the use of single use plastic bags. The next logical step is to extend the charge to all materials and all retailers, so that the scheme can be as effective as possible and less confusing to consumers and retailers.

"Six months after the English scheme launches in October, the Government will have preliminary figures on how much usage has reduced. We hope ministers take this as an opportunity to review the scheme, and seek to create a universal bag charge during the second year of its operation."

The latest figures on plastic bag usage come ahead of the introduction of the 5p charge for single-use plastic carrier bags, which comes into effect in England in October following the success of similar schemes in Scotland and Wales. In Wales the charge led to a 79% decrease in plastic bags taken in the first three years and in Scotland the number of ‘bags for life’ used quadrupled last year.

By comparison, in England ‘bags for life’ only account for one in 20 bags taken from major retailers. This new charge will directly address the number of plastic carrier bags distributed by large supermarkets and small businesses are invited to introduce a charge on a voluntary basis.