Restaurants where less is more

Jeremy Bennett looks at ways of reducing the use of disposable products in restaurants, takeaways and other hospitality venues. 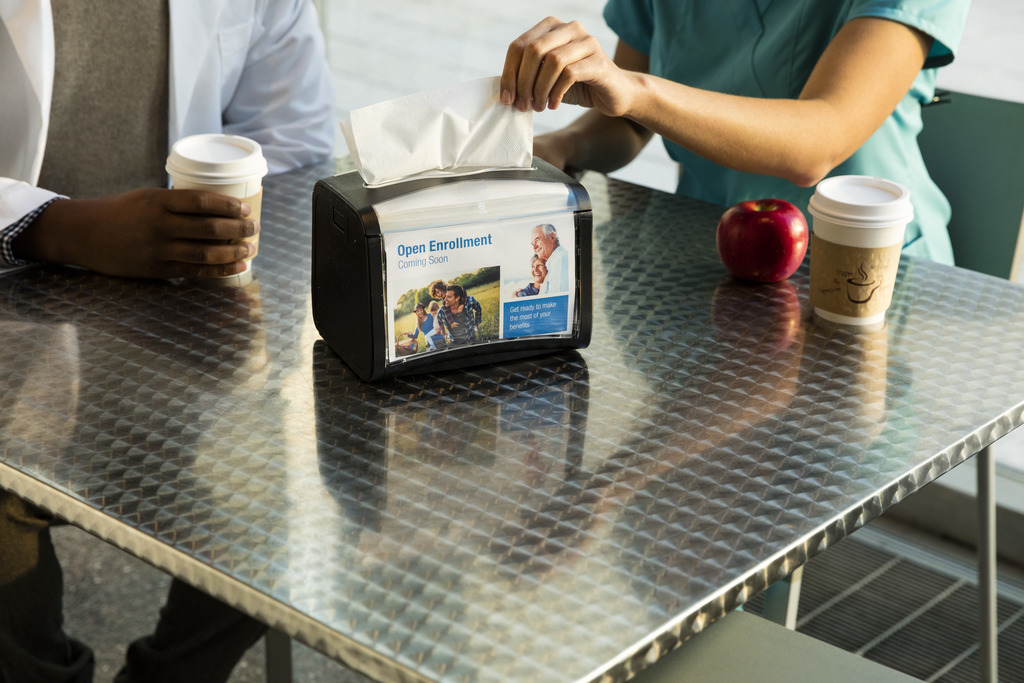 HYGIENE, EFFICIENCY and speed of food delivery are all highly important in the hospitality sector. And as a result, the use of disposable products is particularly high.

For example, surface wiping in the kitchen is usually achieved with the aid of disposable cloths and wipers since these can be used to sanitise units in a swift and convenient way.

Meanwhile, paper napkins are often preferred on tables and counters because these are a convenient solution that help to reduce laundry bills. Takeaways also make extensive use of items such as throwaway cups and single-use cutlery. And of course, disposables are indispensable in restaurant washrooms in the form of toilet tissue and hand towels.

But the average diner is becoming increasingly conscious about sustainability, and most of us are keen to reduce waste and over-consumption where possible. Research carried out by the Sustainable Restaurant Association in October 2020 revealed that the number of restaurant-goers concerned about issues such as climate change and deforestation had risen by 32% since the first lockdown.

A total of 57% of people surveyed said they would like to see outlets sourcing their food produce from at least one local farmer or fisherman, while a similar percentage wanted the option to take their leftovers home to avoid food waste.

Other studies confirm this trend. According to recent research carried out by JWT, 80% of diners now believe it is important that restaurants behave in a sustainable way. The same study also revealed that 74% of consumers find single-use cutlery off-putting when ordering a food delivery, while 58% of diners said they routinely avoid taking single-use plastic items such as forks, spoons and straws.

And while customer attitudes are putting pressure on restaurants to alter their habits on the one hand, those restaurants themselves are being given an incentive to change on the other. Eateries demonstrating sustainable practices are increasingly being rewarded with “Green Stars” by Michelin. The Green Star scheme began in 2021 with factors such as the provenance of ingredients, environmental footprint, waste disposal and recycling being considered by the judges.

Holders of a Green Star include Pensons on the border of Worcestershire and Herefordshire which serves home-grown vegetables from its kitchen gardens and makes its own napkins and chair-coverings at an on-site mill. Other star holders are Pine in Northumberland whose chef leads his team on regular foraging missions, and Angela’s in Margate where meat-free meals are served on tables made from compressed recycled plastic.

So, the pressure is on for hospitality managers to adopt more sustainable practices. And many of them are willingly embracing this trend. Some – such as the Canteen in Bristol – are now adding carbon footprint labels to their menus to prompt customers to make more environmentally-conscious food choices. And many are looking again at their use of disposables.

For example, some are moving away from disposable tableware and using customer incentives as a prompt. Just Salad in the US now runs a reusable bowl programme whereby customers who buy a bowl receive free toppings on each visit. The company also offers a Bring Your Own Cup programme for smoothies and invites takeaway customers to opt out of receiving disposable cutlery if they wish. Just Salad claims to have avoided using more than three tons of single-use waste in 2021 as a result of its policies.

Meanwhile, a nationwide paper Cup Recycling Scheme now operates in the UK under which people can buy their drink from one shop and drop off their single-use cup at another. Essity is part of the scheme along with many major high street chains including Costa, Greggs and McDonalds. The cups are collected on a regular basis and taken to Essity factories where they are stripped of their plastic coating and made into products such as paper towels and napkins.

But disposable products continue to be used widely in hospitality kitchens, washrooms and at point of sale because they are both hygienic and convenient. However, their use can be significantly reduced with the aid of smart dispensing systems.

Wipers are used extensively in restaurant kitchens, often in the form of loose rolls. These are usually strewn around the surfaces so that staff members can access them when a spill occurs or when their hands or surfaces need a wipe.

But wiper rolls frequently go missing – whether this is because they have been borrowed, pilfered, taken for someone else’s use or left to roll on to the floor where they will become soiled and unusable.

Paper consumption in the kitchen can be dramatically reduced by supplying the product in a dispenser that protects it before use and that limits the amount of paper that people can take out at any one time.

Once the operative has managed to get their hands on a wiping roll, he or she is likely to tear off a long length of paper either to save themselves having to go back for more or because the roll makes it all too easy to do so. And since they are taking more paper than is required, much of it will be wasted.

Wipers are a much more useful resource when operatives always know where to find them,. This will result in less waste, lower costs, better sustainability outcomes and a more efficiently-run business.

Many restaurants – particularly fast food outlets and takeaways – offer disposable napkins with their meals. These are often supplied in a dispenser so that diners can take out what they need. However, large numbers of napkins are then wasted because the design of many napkin dispensers makes it difficult to withdraw a single napkin at a time. As a result, the customer will take out a clump of napkins and use just one or two, discarding the rest.

Major waste savings can be made by incorporating a single napkin with each meal, or by supplying a dispenser that has been designed to give out napkins singly.

The use of disposable towels in the washrooms also becomes much more sustainable when they are housed in a dispenser. In some facilities, piles of paper towels are left on the sink units for washroom users to help themselves. But this encourages people to take more towels than they need and they will be dripping their wet hands on the rest of the towels in the process, rendering them unusable.

Many washroom dispensers today are designed to give out towels singly which means diners need to make a conscious effort to take out more towels than they need. This naturally limits consumption and improves sustainability in the washroom.

The use of paper towels becomes even more environmentally-friendly when they are recycled after use. Tork PaperCircle® - the world’s first recycling service for paper towels - enables businesses to reduce their environmental footprint by 40% by creating a closed loop system for used washroom hand towels. The towels are collected by Tork PaperCircle sustainability partners and taken to local recycling centres where they are turned into other tissue products.

Essity won the Sustainability award from the FPA -  the representative voice of food service packaging – with Tork PaperCircle earlier this year.

The use of disposable products makes good sense in a hospitality business – but it is equally important to reduce their consumption where possible and avoid unnecessary waste. By doing so the business will improve their sustainability outcomes while also cutting their costs and making a better impression on their customers.