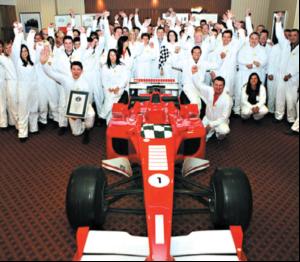 "We found out there was a record there to break - and that it would be a fun one to do," says Jamie Wright, SCA Tissue Europe's marketing communications co-ordinator.

The entire staff of SCA Tissue Europe's Dunstable office participated in the event, which was staged in the run-up to a new industrial launch due to take place in April. A Formula One car was brought into the Horwood House Hotel near Milton Keynes where the event was staged and a Guinness World Records adjudicator monitored the proceedings.The team had to work on the same part of the car's bodywork for a full minute.
MORE FROM THIS COMPANY