Leverstock Green Lawn Tennis Club, on the outskirts of Hemel Hempstead, was founded back in 1961 by Mr Herbert Secretan, the club's first Life President. He donated the land for the club in memory of his daughter Fleur, who had been a keen tennis player. He also donated a large sum of money for the development of the club and many hours and huge amounts of energy in the following years. 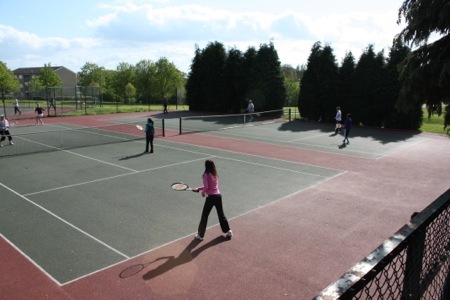 The club’s major problem in those early years was finding enough members to volunteer to mow the 3 grass courts! Now having passed its 50th birthday, the club goes from strength to strength. In 2015, it was featured in a BBC article, highlighting its success at attracting girls of all ages into Tennis Coaching. This year, the Head Coach, Graham Fish, won Hertfordshire County Coach of the year, and then East Region Aegon Coach of the Year, as well as Dacorum Community Coach of the year. Four courts have recently been resurfaced, through intensive fund raising efforts of both the Executive Committee and its members.

More than fifty years on, the club boasts 12 courts in total, on a mix of recently laid Carpet Claytex, all weather and clay court surfaces. In addition there are kitchen and changing room facilities and a subsidised licensed bar supporting a comprehensive social calendar. Today, the membership ranges from 8-80 years of age – and the hygiene and health of its members is of paramount importance. Historically, fabric towels were used and laundered by committee members daily. As the facilities were upgraded, and usage increased, an alternative solution was clearly required. The club looked at a range of hand washing and drying options.

“Hot Air dryers were not an attractive option – hygiene statistics like the ones available from the European Tissue Symposium, showed us quite clearly that bacteria are not removed efficiently from hands using hot air dryers. With children sharing racquets and balls, germs can easily spread in a club environment.” said Graham Fish, Head Coach. “In addition, the toilets are next to the changing facilities. The last thing members need is to walk into an environment where warm, bacteria laden air is being blown around the changing room. We are promoting exercise, healthy living and making the most of an outdoor environment – to a family membership - so it was important for us to move to a product that supported this ethos."

The club chose Katrin as their preferred solution. Graham explained: “The high capacity dispensers limited the amount of time we have to spend servicing the washrooms, and the product quality was excellent.

“We felt that the soft, absorbent towels added a quality feel, and as we started to use them, we realised we were actually requiring less towels, so they were excellent value as well. Katrin 61694 hand towels and System 800 Eco toilet rolls are used in the members changing rooms. Katrin wiping solutions, including Katrin Easy Picks are used in the kitchen, behind the club bar and even out on court when required.

The social committee recently ran a family session, and during the activities, they used a germ powder product to show how quickly germs are spread. Graham said: “It was key to make the younger members aware of the importance of using the new products we had invested in. Metsä Tissue showed us how the powder works, so we thought it would be a fun way to demonstrate what we meant."

The powder is visible under ultraviolet light and can be used to show how far germs will spread if hands are not washed and dried properly.

The club placed powder on one tennis racquet at the beginning of the day, and then the family fun got underway. It included lots of matches, some fun exercises, a barbecue and lots of interaction. Then, at the end of the day, the coaches sent the children on a “germ hunt”. They used 2 ultraviolet torches to show how far the powder had spread. The children were amazed to see it on many racquets, balls, nets, doors, tables, glasses, drink bottles; even windows had the powder on. Graham said “we were re-assured to find some powder on the sinks and on the hand towels in the bins, but the exercise served to make the point – that germs need washing and wiping off hands on a regular basis. Our younger members (and probably some of our older members too...) are much more germ aware now than they were before.”

The Katrin products have been providing excellent hygiene for LGLTC for the past 5 years, but this year also saw the installation of the new Katrin Inclusive Dispensers. Graham explained: “With our wide age-ranging membership, making easy access to hygiene, regardless of age or ability, is especially important, and the new dispensers, as well as looking stylish, do just that.

“We chose the white ones for the washrooms as they add to the “cleanliness” feel of them, but we put the black dispensers in the main bar, part of the social environment, as they have a very stylish feel to them.

Further investment continues to be made in all areas of the club and it is a vibrant part of the Leverstock Green Community. “Today, the members take the excellent washroom facilities for granted - it’s a quality solution that people expect when they pay a membership fee to belong to a club, and Katrin has really lived up to this expectation for us,” Graham said. He concluded: “As Andy Murray wins Olympic Gold for the Team GB once again, and with a large number of fit and healthy junior members in our club, who knows – we could well see a future Olympic Champion coming from our own courts.”