Go roam over the range

Kennedy will show its largest dispenser range ever at Interclean 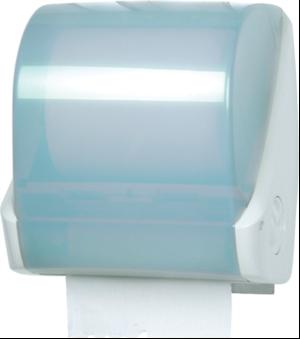 Kennedy will show its largest dispenser range ever at Interclean

Kennedy Hygiene Products (stand 10.105) promises visitors 'an abundant choice' of washroom dispensers at ISSA Interclean Amsterdam this year. Exhibiting its largest dispenser range ever and now located in the exhibition's new washroom segment, Kennedy will showcase four new products in addition to its range of existing dispensers, in an array of finishes and with their associated consumables.

POD is a new no-touch reserve roll paper hand towel dispenser. It provides freedom of consumable choice and is compatible with a broad range of paper roll sizes, core sizes and 1 and 2 ply paper combinations.The unit has a high paper capacity for a compact dispenser of its kind. Its flexibility is also evident - with a patent applied easy towel loading system and rapid roll change feature - service is fast and efficient. POD has a smart modern design and is available in several finishes including chrome.

Another new addition to Kennedy's hand drying family is MINI TEKNA - a new cotton towel cabinet which has all the benefits of the original large sized TEKNA.

Kennedy's new range of waste disposal bins will also be on show.

The recently launched BAMBINA, a 50 litre pedal operated nappy bin with a built in odour control system will be joined by the MEDINA bin for the disposal of offensive hygiene/healthcare waste.

With a large 50 litre waste holding capacity, the units are compact, modern and attractive in design.To ensure maximum hygiene they have a built in odour control system.

A modesty flap ensures waste is not visible to the end user while its large centrally positioned aperture makes it easy to dispose of soiled nappies, dressings and other waste.A patent applied removable hygienic bin protects the inside of the unit from soiling and can be removed for easy cleaning.
MORE FROM THIS COMPANY
Send Enquiry
View Company Profile
RELATED ARTICLES