Restaurant washrooms need to be smart and clean to impress the diners and keep them coming back. But they also need to be ultra-hygienic since the contamination risk is higher in environments where people are eating. 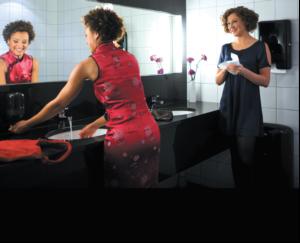 Restaurant washrooms need to be smart and clean to impress the diners and keep them coming back. But they also need to be ultra-hygienic since the contamination risk is higher in environments where people are eating.

Ameal out is always an occasion - but it can also be something of a lottery.

Restaurant customers abandon the familiarity of their own kitchens and place their trust in unknown chefs to provide them with exotic and delicious dishes.

The anticipation builds before the meal actually begins when the diners may be offered bread rolls, a plate of canapÃ©s or a dish of olives.Then the waiter will bring out their appetiser which is likely to have been handgarnished by the chef.

Hopefully the whole evening will be an experience to remember. But it could be memorable for all the wrong reasons if poor hand hygiene on the part of the chef, the waiter or even the diner himself results in a bout of food poisoning.

Every year foodborne illness affects around 30 per cent of us - and meals prepared outside the home have been implicated in up to 70 per cent of the outbreaks that we manage to trace.1 Good hand hygiene is vital in the food preparation sector, particularly after using the washroom.In fact the most frequent cause of contamination in the food and food service industries is via the fecal-oral route.

This means that inadequate washroom facilities both for the restaurant customer and the staff can be lethal. Diners with inadequately washed hands may return to their table and immediately break into a bread roll or help themselves from the communal bowl of olives, or maybe greet a new arrival with a handshake.These actions will potentially contaminate the food they eat or spread bacteria around among friends and acquaintances.

Meanwhile, kitchen and waiting staff who fail to thoroughly wash and dry their hands at frequent intervals may contaminate the handgarnished dishes of diners or transfer bacteria on to their plates.

For example, hand towel dispensers should avoid the user coming into contact with either the next portion of towel or the dispenser itself to minimise cross-contamination. Soap containers should be hygienically sealed since refillable soap systems that use bulk containers could become contaminated before use.And all systems should avoid the problem of soap, hand towels or toilet paper running out between maintenance checks.

Disposable hand towels are a hygienic hand drying system since the friction used to dry the hands physically removes bacteria from the skin.

In busier restaurants, hand towel rolls works well. For example high capacity systems that automatically cut a length of towel to size, presenting each user with a clean portion of towel that is touched only by the user are available. Long-lasting systems mean the towel roll is unlikely to run out between maintenance checks.

Look for long-lasting toilet tissue systems for restaurants to prevent the hygiene issues that could arise when toilet paper runs out.

The system comprises two hard-wound toilet rolls in a compact dispenser that together contain the equivalent of up to 11 rolls of conventional toilet paper.When the first roll is finished, the second drops into place and maintenance staff simply need to drop in a new roll at the end of each shift.

Thought should also be given to making hand hygiene accessible to all diners, for example providing easy-to-use soap dispensers means small children and people with low hand strength can access hygiene solutions.

Where image is paramount, aluminium versions of washroom products may be preferred since these have a smart appearance similar to that of stainless steel while the fact that their surface is resistant to fingermarks means they are easier to clean.

Restaurant washrooms should not only be hygienic and clean - they should also impress and reassure the customer of their high standards.

A recent survey commissioned by SCA into customers'attitudes to washrooms revealed that 42 per cent of diners would rather eat in a restaurant that had attractively designed washrooms.

So maintaining a clean,hygienic and attractive washroom makes good business sense for a restaurant. Besides helping to avoid the bad press and potential litigation that may result from food poisoning cases, a smart and aesthetically-pleasing washroom can actually become one of the restaurant's attractions.
MORE FROM THIS COMPANY