Kentucky mops were used to clean the floors of the Leicester based Premier Foods plant until new site hygiene manager,Chris Bowen,was appointed in 2010. 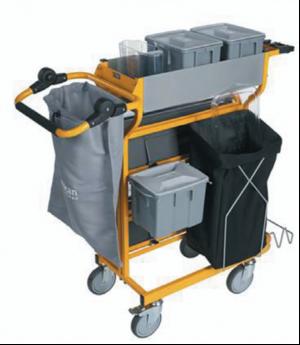 Kentucky mops were used to clean the floors of the Leicester based Premier Foods plant until new site hygiene manager,Chris Bowen,was appointed in 2010.

Chris found that the Kentucky mops were messy, used a lot of water and operatives spent more time walking the length of the premises to fill up mop buckets than cleaning and five minutes later,the water was soiled again.

Having previously used and been satisfied with the Vikan product range,he was keen to trial the Vikan ErgoClean system.

Chris was impressed with the ErgoClean trolley. Not only is it easy to store but it can be adjusted to suit all heights.The trolley also contains boxes with pre-prepared mops enabling the operator to move from one floor area to the other while eliminating the risk of cross contamination. Pre-prepared mops eliminate lifting and wringing of heavy buckets and mops.

Hygiene standards at Premier Foods are said to have improved dramatically thanks to Vikan ErgoClean and its hygiene system.
MORE FROM THIS COMPANY