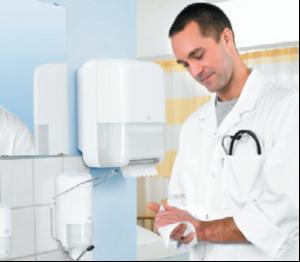 The highcapacity dispenser for the Tork Advanced Hand Towel Roll used in NHS hospitals, automatically cuts a length of towel to size inside the unit and presents each user with a clean portion of towel.This single-sheet dispensing operation controls consumption while helping to visitor only touches the towel they use, reducing the risk of cross-contamination. Also selling well within the NHS is the Tork Premium Interfold Hand Towel.

These large towels were introduced in 2002 to encourage better hand hygiene practices since they were said to be softer than the rough, abrasive towels once traditionally used in UK hospitals. In 2003, the NHS added Tork Advanced Zigzag Fold Towels to their list for use in general wash stations and patient washrooms.
MORE FROM THIS COMPANY