Cleaning up their act

The 2010 Team Clean Challenge Awards Ceremony - Prison Strand was held in London in May. Evidence suggests that prisoners who leave prison with a fully accredited assessed skill are extremely valuable to employers. Skills give confidence and a better chance of entering the workplace. Gerardine Coyne reports 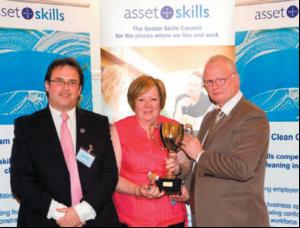 The 2010 Team Clean Challenge Awards Ceremony - Prison Strand was held in London in May. Evidence suggests that prisoners who leave prison with a fully accredited assessed skill are extremely valuable to employers. Skills give confidence and a better chance of entering the workplace. Gerardine Coyne reports


Skills training is vital."This is an area of activity that I really really believe in. It is so important to help people find a purpose and develop a skill they didn't have, or had forgotten they had," stated Richard Beamish,Asset Skills CEO opening the ceremony.


Chris James is the director of research & development at Asset Skills.He was behind the Asset Skills 2010 Competition. A team of four; a manager, a supervisor and two cleaning operatives had to complete cleaning challenges of a stairway, a bedroom and a hard floor."We try to set up a realistic cleaning cycle of:Meet the client, deliver the cleaning and monitor the results," explains James.


This year there was also a new assessment marking scheme based on an excellence model.Teams were awarded 2 for excellence, 0 for competence and -1 for incompetence."People expect competence," says James,"therefore no marks were awarded for attaining it." Facing the challenge The Team Cleaning Challenge - Prison Strand took place in March 2010, and from the results, the strengths were:Team work,Techniques and Operations,Health & Safety, Customer Care and Corporate Image.


Learning areas, where improvement was needed,were:Time Management,Measurement & Calculating,Estimating & Costing,Planning & Prioritisation and Allocation/Delegation of work. [As Measurement & Calculating involved dilution rates it is interesting to note whether it is the participants'maths skills that need work, or whether errors are due to unclear instructions/diagrams on the products].


"There is still a national shortage of general and specialist cleaners," says Maggie Walsh,Offender Employment Specialist at London Employer Accord."Every year 11,000 BICSc certificates are awarded to offenders, and over 500 of those are for assessors. For employers, customer service training is just as important as cleaning skills.We are producing fully trained, risk assessed staff, and if they gain work after leaving HMPs and pay their taxes, then this is a return on public money." This year 25 prisons initially entered the Team Clean Challenge, but some pulled out due to difficulties."The hardest task is to get judges and observers into prisons at the same time." explains Walsh.The challenge has to be adapted to fit prison rules. Spaces have to be aligned with BICSc centres sizes, and there were problems using staircases as cleaning areas because of security.


"The most important thing is to get employers in and taking people on. One case study is 'Matt' from HMP Lindholme.He is now employed by Doncaster City Council and has his own patch and van. He was also 'Outstanding Learner of the Year'at Manchester City College." Walsh says there has been a lot of interest from other EU countries in running these awards.


A positive release
Simon Boddis is the director of the National Offender Management Service,Ministry of Justice:Offender Skills."Back in the day we used to use work as a punishment! Now we've raised the profile of work in prisons.A lot of our people failed at school and have never worked before. Annually 380 - 400, 000 people are imprisoned, and most will be released at some point.Getting a job makes a difference to the individuals and prevents future victims.


"It's not just about being 'nice' to prisoners.The government needs to save as much money as possible at the moment, and £12bn is the cost of prisoners being re-imprisoned.


"Employers have said that they are surprised at the loyalty of exprisoners and that actually they make the best employees as they are grateful to have a job.They have been risk assessed to the nth degree so you know exactly who you're taking on.


"I have to admit, I too thought this was a barking mad idea three years ago. I wasn't confident about advertising it, but now I want to spread the word. It's fantastic."
Team Clean Challenge 2010 Awards Winners
Gold Award - Winning Prison - HMP Lindholme (pictured L to R Simon Boddis, Sue Earle, Ken Jones)
Silver Award - Runner Up Prison - HMP Erlestoke.


Raising the profile of skills
Simon Bartley, UK Skills chief executive touched on the area of skills in general."I have no problem with 'Education, education, education'," he argued."But Tony Blair stated that his aim was that 50% of school leavers should attend university.What about the other 50%? Where are they?
"UK Skills was set up to ensure that apprenticeships are viewed as equally important and as aspirational as higher education.We promote skills and we run national training awards on behalf of the government.We receive 70% of our funding from the government and 30% from private companies.


"We believe that competition is a way of moving individuals from competence to excellence and it raises aspirations.We run local, regional and national heats and take the best young people to compete at world level every two years at WorldSkills or EuroSkills.


"In the 2009 WorldSkills, the UK won three gold medals, meaning we have the best cook, the best electrician and the best painter and decorator in the world.


"These people will probably be earning more than young people leaving university with debt and they will be paid while training.


"What we want to impress is that university is not the only route to success." WorldSkills 2011 is to be held in London.www.worldskills.org click here or for www.ukskills.org.uk Click here
MORE FROM THIS COMPANY
Send Enquiry
View Company Profile
RELATED ARTICLES