Shops and businesses around London including Costa Coffee, Tate Modern, BFI Imax and Leon have joined a Thames Water scheme that offers people free tap water ‘refills’ as part of the Mayor of London’s plans to reduce single-use plastic bottles in the capital. 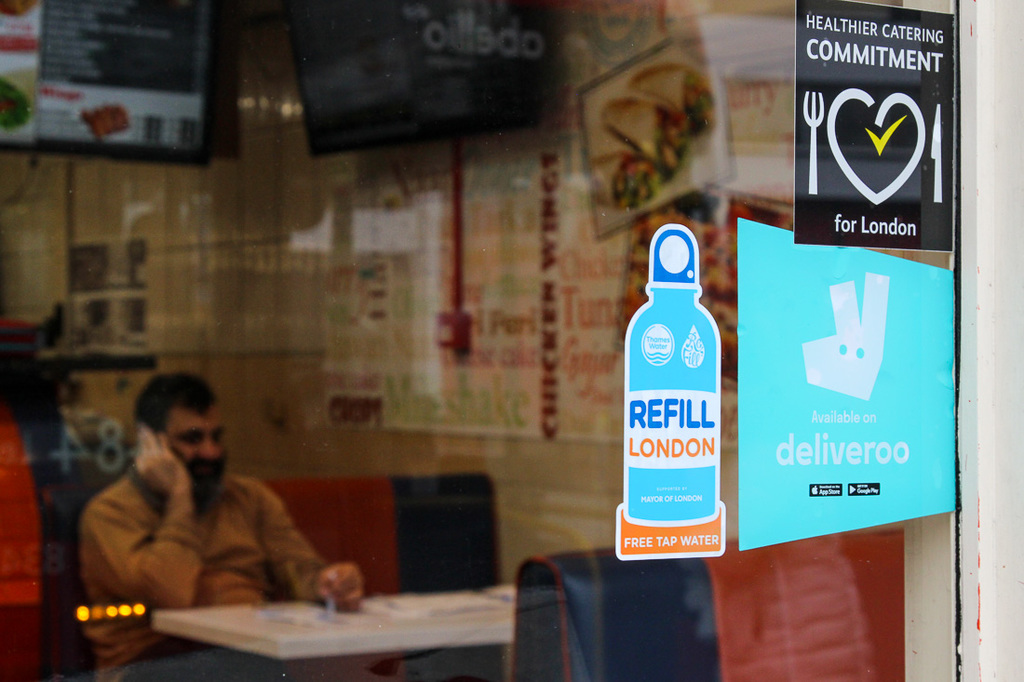 The average London adult buys more than three plastic water bottles every week – a startling 175 bottles every year per person. In total, some 7.7 billion plastic bottles are bought across the UK each year, resulting in substantial amounts of single-use plastic waste.

The Mayor is keen for Londoners to adopt small changes that can have a big environmental impact – like refilling bottles and cups with tap water, instead of needlessly buying new single-use ones.

He is supporting a pilot of the Refill London scheme which is run by Thames Water and City to Sea, a campaign group that aims to help stop ocean pollution. They will be recruiting even more businesses to the scheme over the coming weeks and months. And if this proves a success the Mayor plans to help roll the scheme out across the capital over the summer.

The Mayor of London, Sadiq Khan, said: “A free tap water scheme is long overdue in London and I welcome all of the retailers and business who have shown their strong commitment to reducing unnecessary plastic waste by joining the London Refill scheme.

“We all need to try harder to cut the excessive use of single-use plastic bottles, cups and cutlery that can end up pointlessly overflowing our landfill sites, finding their way into our oceans and harming our environment. I hope that even more businesses sign up to the scheme to help Londoners make small but significant steps, like refilling our bottles, to drive down plastic waste. City Hall is part of the scheme and I encourage everyone to download the free London Refill app to see which outlets are involved.”

The Refill London scheme will initially operate in five areas of London: Greenwich town centre, Lewisham High Street, the Southbank and Bankside, Regent St, and London Bridge (More London). More than 65 businesses and shops which include Costa Coffee, Tate Modern, BFI Imax and Leon have already joined the Refill scheme in the five areas, and will also be listed on a free Refill app and website (www.refill.org.uk) that lists all the locations in London and more than 5,700 refill locations across the UK.

Participating shops and businesses will have stickers in their windows letting people know they are offering free Thames Water tap water and that there is no need to feel uncomfortable or embarrassed asking for it. The #OneLess campaign, led by The Zoological Society of London, will evaluate the first phase of the scheme and their analysis will feed into plans for a wider roll-out.

The new scheme is part of the Mayor’s wider plans to reduce plastic waste and protect the environment. Sadiq announced an additional £6m for environmental schemes in the capital, including funding over the next three years for the roll-out of new public water fountains across London and waste reduction work.

The production of bottled water is around 500 times more carbon intensive than tap water, and Thames Water also has more stringent quality tests – around half a million a year – than bottled brands. The Refill initiative builds on the success of Thames Water’s London On Tap campaign, launched in 2009, which empowered diners in restaurants to ask for free tap water as an alternative to bottled brands. It led to free tap water being offered as standard across most establishments still today.

Thames Water chief executive, Steve Robertson, said: “Nurturing and protecting the environment is a core mission for Thames Water and we are proud of the quality of our tap water. By making it even more accessible we can together limit the use of millions of single-use plastic bottles which sadly end up in landfill or in our rivers and oceans.”

Businesses are also approached by volunteers from City to Sea and encouraged to get on board the voluntary scheme. New outlets are added to the app daily.

City to Sea founder, Natalie Fee, said: “Refill puts the power to stop plastic pollution in people’s hands – it’s a fantastically easy way to reduce your plastic consumption and save money at the same time. Businesses can add themselves to the app too and help create the wave of change needed to keep plastic bottles out of the Thames!”