As demand for recycling segregation at source increases Leafield Environmental has introduced a new suite of smart, stylish recycling bins that accommodate up to four individual waste streams. 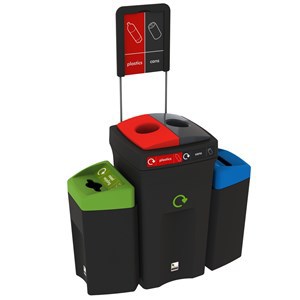 With many lid apertures and colours available the choice of waste stream combinations is wide.

The cost of waste disposal to landfill is increasing rapidly as landfill opportunities become rarer. The contamination of mixed recyclables continues to be a problem. Mixed dry waste for recycling that has a positive value can rapidly become a liability thanks to contamination. To many, the term “mixed recyclables” is still considered to be an alternative to “rubbish”.

According to Leafield Environmental, offering a choice of four separate waste receptacles in a single hub can encourage users to stop and think and hopefully make the correct rational segregation decision.