New master for the Worshipful Company of Environmental Cleaners

Following the ancient traditions of the City Liveries, Mr Philip Morrish has been installed as master of the Worshipful Company of Environmental Cleaners at its annual ceremony at St Olave’s Church, Hart Street within the City of London. 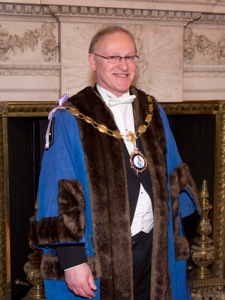 Mr Morrish has had a 30-year career in investment research, institutional broking, and market-making. He started his career as a generalist and became a number one ranked analyst in the chemical and waste management sectors. His connection with the environmental cleaning industries arose from this role and expertise.

Mr Morrish said: “I am very honoured to have been installed as Master of the Worshipful Company of Environmental Cleaners and, alongside my fellow officers, and our members, I will represent, promote and enhance the professional recognition of the environmental cleaning industries within the City of London and further afield.”

Mr John (Jack) Broadley was installed as senior warden and Mr Darren Marston as junior warden at the ceremony.

Established in 1986, the Worshipful Company of Environmental Cleaners is a highly relevant, modern Livery Company, supporting and preserving the ancient customs and traditions of The City whilst meeting the changing needs of a major 21st century industry. The company aims to encourage and maintain high standards of practice and integrity while promoting and supporting education, training and research projects within the cleaning industry.

Membership of the Worshipful Company is made up of 200 senior managers, representing many of the major cleaning and support service management companies and the manufacturers and suppliers to the industry.

Livery Companies are governed by a master, Wardens and a court of assistants, which is the Livery Company's governing body.