It was an evening of entertainment, networking and first-class cuisine, as over 200 guests gathered at the Forest of Arden Hotel and Country Club in Birmingham for the BICSc Annual Awards. 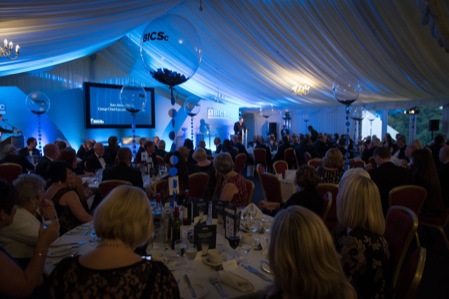 The black-tie event on 17th September attracted cleaning and FM professionals from across the industry who enjoyed a memorable evening, which saw eleven awards presented to those who had maintained exceptionally high standards via training and assessment throughout the year.

The Institute’s top accolade, The Sholom Gordon Award, went to Doug Cooke, CEO of Principle Cleaning and former chairman of the British Cleaning Council, for his services to the industry over many years.

The BICSc Awards Dinner is one of the few ‘must-attend’ events in the cleaning and FM calendar, and the purpose built conference marquee adjoining the Forest of Arden Hotel, was a perfect setting for this special evening.

After the presentation of the awards and banquet dinner, guests took part in the Charity Auction and raffle, which this year was in aid of the St Margaret of Scotland Hospice, raising £2,000.

With the evening’s main business over, live band Stirling Austin took to the stage and performed an uplifting set of classic hits from the Motown and Swing eras, filling the dance floor until the evening came to a close around midnight.

Organisers say it was one of the most successful awards night's yet, and wish to thank everyone who took part, with a special mention to the sponsors and award winners – listed below.