School's out for summer

As the summer begins for students, decision-makers in educational facilities will be looking at how best to equip their buildings for autumn. Charlotte Branwhite from SCA looks at the issues 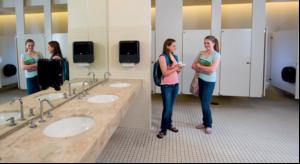 Equipping the washrooms of an educational establishment is a perennial headache. Problems such as vandalism, mess and pilferage need to be considered alongside all-important issues such as hygiene and cost. Today's schools and colleges are particularly strapped for cash which means that costs need to be kept down wherever possible. This makes it a temptation for facilities managers in charge of school purchases to opt for what on the surface appears to be the cheapest products such as C-fold hand towels, conventional toilet rolls and soap bars.

But many have come to realise that these products do not necessarily reduce the overall cost. C-fold towels can be particularly wasteful as they can easily be pulled out of a dispenser in clumps. Unused towels may then be discarded on washroom units where they will quickly become soggy and soiled. Not only does this lead to wasted towels, but also many man-hours spent cleaning away the mess.

Conventional toilet rolls, meanwhile, may become missiles for highspirited schoolchildren or be used to block the toilets by vandals. This will result in cubicles being out of service - plus a shortage of available paper. Toilet rolls are also prone to pilferage by hard-up students in colleges and universities. And soap bars will quickly become cracked and grimy which will potentially result in poor hygiene while also leading to a large part of each bar being wasted.

So it seems clear that washrooms in the secondary and tertiary education sectors should be equipped with cost-effective systems that keep mess down to a minimum while avoiding supplies running out, preventing abuse and vandalism and maximising hygiene.

Smart solutions However, lockable dispensers will solve many of the typical educational institution problems since these will prevent pilferage, vandalism and contamination in one go. A good dispensing system will also naturally control consumption so that youngsters will take out only the amount of soap or paper they need. This will prevent waste while also keeping down costs and avoiding the issue of unused hand towels left to clutter the units and floor.

A good example of this is the new SmartOne Toilet Tissue system which reduces consumption by up to 40% through single sheet dispensing. This helps to reduce waste, control consumption and cut costs while also reducing time spent refilling. The lockable dispenser prevents pilferage and product contamination while the sealed casing improves hygiene in the vulnerable school washroom.

In the college and university sectors, all lectures tend to finish at the same time which can lead to large numbers of students descending on the washroom at once. Here it is important to avoid queues since this might lead to students neglecting their hand hygiene - and infections can quickly spread in crowded colleges and universities where 'Fresher's Flu' is a recognised phenomenon.

Paper hand towel systems are a good choice here since warm air dryers can create queues or lead to people failing to dry their hands thoroughly, a practice that can lead to bacteria breeding on damp hands.

Tork Advanced hand towel rolls are particularly suitable for use in schools and colleges since they are an economical towel in a highcapacity system. This means they are less likely to run out between maintenance checks.

The most suitable soap system in a school is one that comes in a sealed cartridge that prevents any risk of contamination before use.

Bulk fill systems - though generally perceived as lower in cost - can be contaminated before use and also spilled during the refilling process, which means time will be wasted cleaning up any mess.

Tork Foam Soaps -either in the Mild or Extra Mild formats - work well in a busy school since the dispenser contains 2,500 shots of soap compared with around 1,000 for most liquid soap systems. This means the soap is unlikely to run out during break and lunchtime periods. The mild formulations will not dry the hands or sting the eyes, and the dispenser is particularly easy to use which will facilitate hand washing among younger secondary school children.

Once the correct soaps, hand towels and toilet paper systems have been installed, the washroom of a school or college should be regularly cleaned and maintained. To prevent bad smells, a low-cost tag air freshener system such as the Tork Universal Air Freshener can either be looped around washroom pipes or placed in a plastic holder and attached to the washroom wall or toilet door.

Equipping the washrooms of a school, college or university presents multiple challenges as the toilets come in for heavy use - and in some cases, abuse. But most of these issues can be solved by choosing sturdy, lockable dispensers that are easy to clean and protect the soap, toilet tissue or hand towels inside.
MORE FROM THIS COMPANY