Are your visitors waiting for washroom facilities?

Washroom queueing can be a pain - particularly in a venue where many people flock to the washroom at once - and a huge influx can lead to vital consumables running out. SCA's Charlotte Branwhite looks at how to prevent both these issues 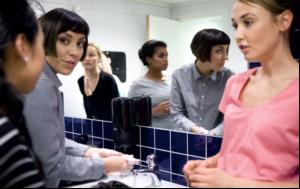 Washroom queueing can be a pain - particularly in a venue where many people flock to the washroom at once - and a huge influx can lead to vital consumables running out. SCA's Charlotte Branwhite looks at how to prevent both these issues

Aquick search of the internet suggests that the average person spends around three years of their lives in the toilet. This is a huge chunk of one's valuable time that could have been better spent on any number of other activities. Visits to the washroom may be unavoidable, but queuing to use the facilities is not. No wonder, then, that so many people are unwilling to queue for the loo and are likely to be put off those venues where they may have to wait.

Stadiums are a prime example. A survey carried out by SCA some years ago revealed that 27 per cent of stadium visitors avoided using the washrooms at peak times such as intermissions. A staggering 44 per cent shunned stadium loos altogether, while 20 per cent said they avoided drinking at such venues. This situation is obviously unsatisfactory. The discomfort and inconvenience felt by stadium visitors who queue - and by those who either refrain from using the facilities or rehydrating themselves - will leave a negative impression among all those concerned.

In a stadium the answer may be to provide extra temporary loos, but in theatres and cinemas - particularly those housed in older buildings - space is often limited which means that installing more cubicles may not be possible. However, delays can be avoided in any busy washroom by ensuring that each cubicle is adequately stocked with consumables. Washroom visitors will avoid loos with no toilet paper and queues will quickly lengthen as a result.

Similarly, hand washing and drying facilities should be quick and seamless in any busy washroom to avoid congestion at the basins.

Suggested toilet tissue options in a busy washroom are a long-lasting jumbo roll or a twin-roll system. We estimate the Tork Jumbo Roll, for example, holds the equivalent of up to 15 conventional rolls which means that even in the busiest washrooms, the paper supply is unlikely to run out during the course of the day.

Another good solution for a continuous supply in a medium to heavy-traffic washroom is the Tork Compact Auto Shift. This comprises two compact long-lasting rolls which are together equivalent to up to 11 conventional rolls. The second roll automatically shifts into place when the first roll is used up which means the paper is unlikely to run out between maintenance checks.

Soap box Soap systems in a busy washroom should be easy to use and housed in long-lasting systems that prevent the risk of the soap running out.

This will avoid congestion at those few remaining basins with a soap supply. Tork Foam Soap contains 2,500 doses of soap per refill - more than double the number contained in a liquid soap dispenser of the same size - and therefore ensures a long-lasting supply. The soap is housed in a dispenser that has been purpose-designed to be easy to use - even for children and people with reduced hand strength - while the fact that the cartridge only takes a few seconds to change means maintenance staff can quickly refill the dispensers when required.

Fast, convenient hand drying systems are vital in busy washrooms to prevent queues from forming. Traditional warm-air dryers can take up to 50 seconds to dry the hands and a survey carried out by Tork revealed that only 23 per cent of respondents were happy to wait this long. Around 38 per cent of people said they would rather shake their hands dry instead, while a further 39 per cent admitted to wiping their hands on toilet tissue or even on their clothes rather than wait for the warm air dryer to take effect.

Today's jet-air dryers work much faster, but the fact that washroom visitors are still required to stand still while their hands are dried means queues may still form during busy periods. We suggest several hand towel dispensers strategically positioned between the sink units and the door; this allows visitors to leave the basins, take a towel and dry their hands on the go to avoid any congestion. Bins should be provided near the washroom door to allow the washroom user to dispose of their used towel in one fluid movement.

The Tork Hand Towel Roll system is particularly suitable for busy washrooms since the high-capacity dispenser holds sufficient paper for up to 400 washroom visitors. This reduces the risk of hand towels running out between service checks which could result in congestion around one or two dispensers.

Tork Zigzag Fold towels are another good, economical option since they are housed in a dispenser that can easily be topped up with more towels when required. The dispensers for both the Tork Hand Towel Roll and the Tork Zigzag-fold towel are both designed to give out only one sheet of paper at a time, which naturally controls consumption and prevents the supply running out.

Queues are difficult to avoid in any busy venue, particularly when the nature of the facility means that everyone heads to the washroom at once. But by using long-lasting systems in smart dispensers that control consumption and are easy to top up, queuing can be kept to a minimum. Contact the company for more details.
MORE FROM THIS COMPANY