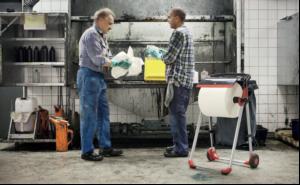 The Tork industrial wiper dispensers are now even more convenient and user-friendly following the introduction of an integral bin liner holder and new fixing options, says the company.

Its Performance W4 dispenser for clean-cut wipers can now be mounted on any workshop wall - even tiled or metal surfaces.

Meanwhile, a new bin liner holder for the Performance W1 floorstand allows wipers to be easily disposed of at point of use.

The W4 is a sleek, slimline wall-mounted system that dispenses Tork folded wipers one at a time to naturally control consumption. The splash-proof dispenser protects the wipers from contamination before use.

Besides offering the traditional solution using screws and a wall bracket, the dispenser can now be supplied with magnets for affixing it to metal surfaces, or suction cups for use on smooth surfaces such as tiles.

Also new is a bin liner holder for the W1 Performance floorstand which saves operatives valuable time when disposing of used wipers.

The integral bin also saves floor space since there is no longer a need for a separate bin.

The W1 dispenser has sturdy wheels allowing the unit to be moved around the workshop to wherever it is needed. The bin liner holder is easy to mount and the bag remains securely in place at all times. It can be used with any standard 125 litre bin bag.

Performance dispensers, which have a distinctive red/smoke housing, are designed to improve workflow and reduce costs in the industrial environment by saving time and reducing waste and overconsumption.

The W4 dispenser can be used to give out various wipers for component cleaning, workshop wiping, bodywork polishing and heavy-duty cleaning with solvents. The W1 dispenser houses the Tork Advanced 400 wiper series for a range of general industrial applications. Please contact the company for more information.
MORE FROM THIS COMPANY