Even with rigorous and regular cleaning, busy washrooms are home to a host of unpleasant organisms and bacteria, including mould, fungi and Volatile Organic Compounds. Peter Barratt, technical manager, Initial Washrooms looks at the many bacteria battlegrounds of the washroom 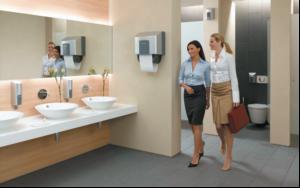 Even with rigorous and regular cleaning, busy washrooms are home to a host of unpleasant organisms and bacteria, including mould, fungi and Volatile Organic Compounds. Peter Barratt, technical manager, Initial Washrooms looks at the many bacteria battlegrounds of the washroom

The washroom provides the perfect breeding ground for bacteria and viruses, because it's warm and moist.With each employee visiting the washroom three times a day on average, there are many opportunities to add and pick up bacteria from both the air and exposed surfaces,making the washroom a bacteria distribution centre.

Over many and various studies, typical bacteria and viruses found in washrooms include Salmonella, Streptococcus, E Coli, Hepatitis A, common cold and flu and Rhinovirus. One of the major causes is when faecal micro-organisms are ejected from toilets and urinals into the air during flushing - known as the 'sneeze effect'- and settle on washroom surfaces. These microbial aerosols can travel to the outer reaches of the washroom in as little as a minute, landing on all surfaces within the washroom including door handles, taps, and sink areas, soap dispensers and drying units. Larger droplets also land on toilets seats, which is why female washrooms are often less hygienic than male.

Identifying hot spots Bacteria 'hot spots',where the highest levels of harmful airborne bacteria are deposited on surfaces,are the floor in front of the toilet,sinks,top of the toilet seat,taps,the wall behind the toilet,the toilet flush handle and door handle.

Cross contamination is a major risk of the washroom, as the bacteria present is passed between individuals and other surfaces by hands. There can be as many as 1,000 resident bacteria per cm2 on the hand including transient bacteria such as E-Coli and Streptococcus. According to a study by the London School of Hygiene and Tropical Medicine, two thirds of men and one in three women don't wash their hands with soap after going to the toilet.

And even if hand washing occurs,drying is an important factor too in reducing cross-contamination. If hands are not dried properly, then the transfer of bacteria not eliminated by the wash itself is more likely to occur.

The difference is significant; studies have shown that by drying hands properly,the numbers of bacteria transferred reduces by an order of 99%.

Washroom bacteria and poor hand hygiene continues to be a serious health threat, leading to the spread of disease. Illnesses caused by the many bacteria found in washrooms include food poisoning, urinary tract infection, dysentery and gastroenteritis. For companies, this can have a very negative effect on staff and customers, increasing sickness rates, staff absenteeism and losing custom.

Something in the air Airborne and surface bacteria also create an unpleasant odour.

Research by the University of Surrey's Environment Psychology Research Group into washroom behaviour, showed that washrooms reflect the image of a company both to employees and to customers; it is a public statement of a company's values and attitudes. If washroom hygiene standards are low, then users will perceive that standards are low throughout the organisation. This can be particularly harmful for the service sector. The report showed that in the case of restaurants there was an immediate association in the minds of interviewees with the state of the washrooms and the likely cleanliness of the kitchens.

Unfortunately the use of disinfectants and regular cleaning can only help in controlling bacterial spread. Bacteria multiply at exponential rates - from 1 cell to 8 million cells in an 8 hour working day - too fast for normal cleaning products to keep up.

Bacteria in the washroom need to be tackled on two fronts - obviously good hand hygiene among users, but also solutions that drastically reduce germs and bacteria in the washroom. One such solution is the air steriliser, which uses a combination of different sterilising techniques to control contamination and destroy bacteria both in the air and on washroom surfaces using ozone, photoplasma, negative ions, germicidal light and photo-catalytic oxidation.
MORE FROM THIS COMPANY