I can go for miles and miles 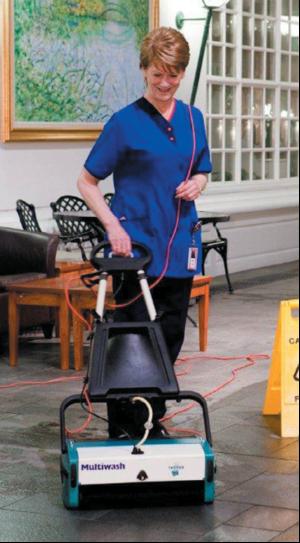 The latest Truvox Cimex Encap system has just been supplied to MITIE Cleaning, which holds the contract to maintain the eighty-seven miles of carpet, plus some hard floors, at Bank of America in Chester. MITIE Cleaning employs forty-two staff at the site and some 5,500 staff work in the building.

Key issues in the choice of machine were compactness and manoeuvrability - as the machine had to be capable of getting into small corners - and the ability to clean a large area of carpet and leave it almost dry to the touch.Ease of use and simplicity of control were also important, as was ease of transport.

Cheryl Bentham at MITIE decided on the Cimex Encap system from Truvox because of its outstanding stain removal ability and high standard of cleaning.

"We inevitably get a lot of spillages in a building this big with over five thousand people,"explains Bentham. "The Cimex Encap system is a remarkable technology that does the job to a very high standard. It gets into pod areas and managers' offices, removing stains and soil as it goes." The Cimex Encap system is a complete carpet cleaning system that is capable of modifying the nature of the soil to make it easy to pick up, and which also shampoos the carpet.To use the system, a really powerful upright vac and a supply of Truvox Cimex-Encap Low Moisture Carpet Cleaner are needed.MITIE Cleaning has been supplied with the Truvox Valet Commercial Upright as part of the system.

The Cimex-Encap Low Moisture Carpet Cleaner gets into the pile of the carpet and encapsulates the soil, turning it into a brittle residue.This contains the oily soil which cannot normally be vacuumed, and makes it possible to vacuum up all soil types in one go.

The cleaned carpet is normally dry to the touch in fortyfive minutes to two hours and repels soils and stains after treatment. No rinsing is required.Truvox provided full training for all the cleaning staff who use the equipment.

MITIE has offered Truvox the opportunity to take any potential customers for the Cimex Encap system to view the system in action at the site.
MORE FROM THIS COMPANY