'Green Hygiene - A Leader in Sustainability' was the theme of this yearÂ´s Tork stand at ISSAInterclean. 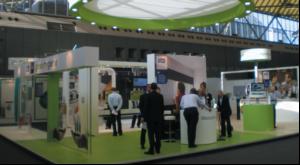 'Green Hygiene - A Leader in Sustainability' was the theme of this yearÂ´s Tork stand at ISSAInterclean.

The stand featured 'story walls' on hygiene and sustainability and baby spruce trees were given out to customers.

The company recently appeared in the Global 100 Most Sustainable Corporations list for the sixth year running and also featured in the Ethisphere Institute's list of the world's most ethical companies for the third year in a row.

The new Tork Performance range of dispensers for workplace wipers made their debut at this year's event.

The stand was situated in the new dedicated washroom area.

"Being in a dedicated washroom area made it is easier for customers to find us," says Asa Kalentun, SCA Tissue Europe's North West regional marketing director."Our stand was very busy and we received some high quality leads."
MORE FROM THIS COMPANY