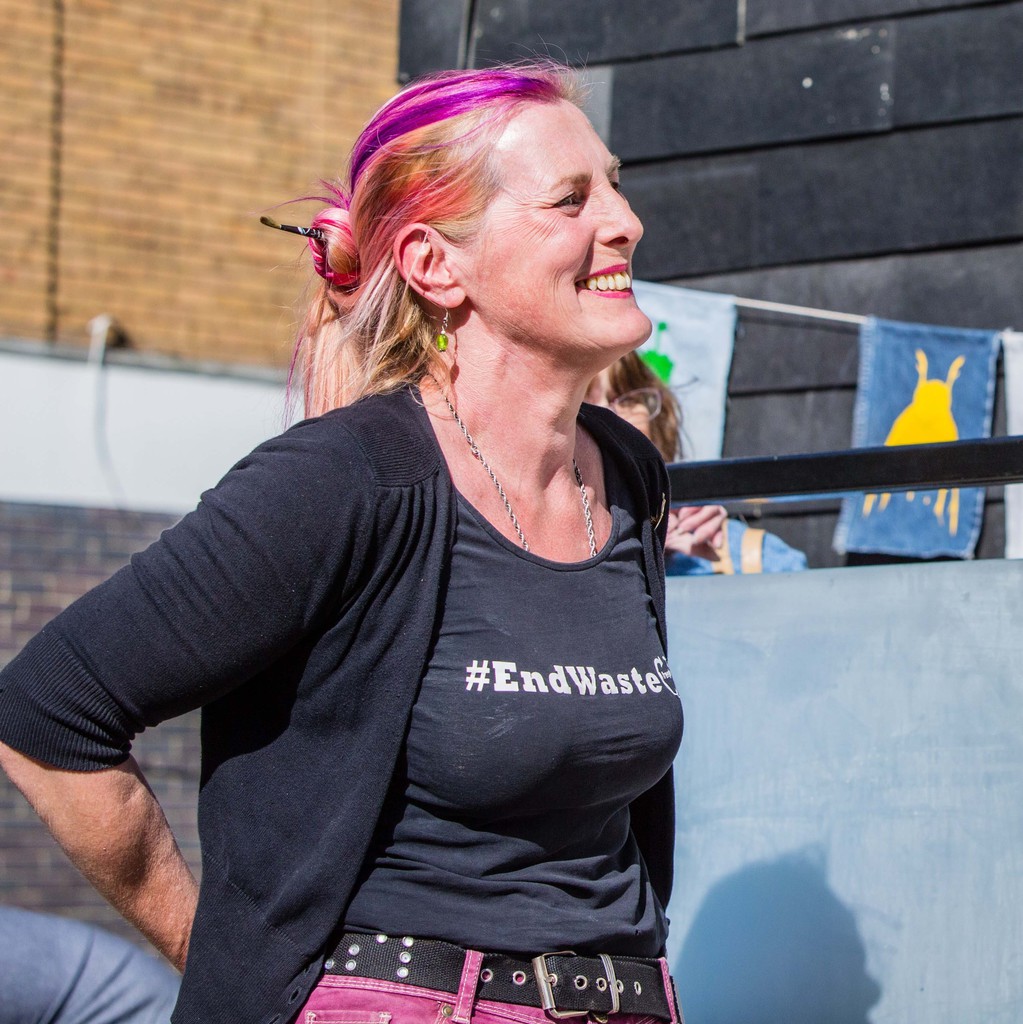 Cat Fletcher has good reason to call herself 'the resource goddess'. Over the past decade, she's successfully carved out a career turning other people's junk into someone else's treasure.

In 2009, she co-founded non-profit organisation Freegle, a network that enables thousands of people throughout the UK to give their unwanted goods away online.

"They can be lovely and useable but you can also pass on things like a broken toaster that you don't know how to fix," she says.

Fletcher also became the first person to be hired as a reuse manager by Brighton & Hove City Council, meaning she is called in during building renovations to sort through all the unwanted waste and redistribute it to local businesses and charities.

On top of that, she worked with architect Duncan Baker-Brown to source materials for the award-winning Waste House, which was built at the University of Brighton in 2014. The house is 90% constructed with repurposed rubbish, ranging from videotapes and floppy discs to toothbrushes and denim jeans.

Fletcher has always been passionate about reuse. "I've always bought secondhand," she says.

Originally from Australia, Fletcher moved to the UK 26 years ago after marrying a man from Brighton. She was "horrified" to find there were no weekly kerbside recycling collections.

"So I bought a van and I used to pick up all my friends' recycling and take it to a recycling place for them," she says. "They thought I was totally bonkers!"

According to World Bank researchers, at least 3.1 million tonnes of plastic and other solid waste is created globally every day, 10 times the amount a century ago. Environmentalists say finding new uses for old materials should have as much prominence as recycling. And with limited resources in the world, Fletcher thinks it's logical for us to reuse more of our stuff.

After winning a local volunteering eco-award ten years ago, Fletcher was invited to sit on Brighton & Hove's sustainability partnership – a quarterly meeting between businesses, charities and the local authority to discuss how they can make the city more sustainable.

"After a couple of years of attending these meetings I started to get really cranky because I would arrive to the council building and there would invariably be a skip outside full of filing cabinets, desks and equipment that the council was throwing out," Fletcher recalls.

"I did nag them to death, and eventually at one meeting they said: 'We don't know what else to do. We have this ongoing problem of updating our furniture or renovating our buildings, and we have to use a licensed waste manager'.

"I suggested to them that they could employ me and I would just find people that could reuse whatever they were throwing out."

Fletcher was given a month to clear the floor of one office building that was being renovated and redistribute 16.9 tonnes of waste.

"I documented everything I did, and there was only a couple of wheelie bins of genuine waste at the end of the project. There were no skips used, no waste disposal."

She presented a report to the council of the carbon savings and money saved in waste disposal costs. Impressed by the figures, the finance director gave her a contract immediately.

The most challenging project involved emptying Kings House, the largest office block in the city at 100,000 square feet and housing 1,000 staff. It took 18 months to empty 170 tonnes of furniture and equipment, and for nine months the building was still occupied.

By working in partnership with Freegle and reaching out to local community and voluntary sector organisations, Fletcher was able to ensure nothing went to landfill.

The project benefited local residents, universities, schools, hospitals, businesses, and charities, which reused 150 tonnes of furniture and equipment. It also saved the council £41,000 in disposal costs, and resulted in 225 tonnes of carbon savings (reduced CO2 emissions).

For those thinking of replicating similar projects, Fletcher recommends using the actual building they are vacating as a temporary reuse depot "so that you physically don't need to handle and transport everything, then redistribute everything from that space".

Saying that, Fletcher does own 10 shipping containers where she can take the leftovers at the end of jobs and continue trying to find them a home.

Communicating with staff is also important.

"I work with all the teams before they vacate a building, otherwise people in an effort to conceal their waste will just whack everything in a black bin bag and tie a really tight knot in it and and try to sneak it out of the building in any way they can," she says.

"Sometimes we'll set up an amnesty room within the building where they can take anything they don't want and put it in that room, which means it doesn't go in a bin and it's sitting there waiting for me to come along."

Another benefit of running the projects out of the facilities she's clearing is that staff who are a bit cynical can see the positives with their own eyes.

"They will see a charity pull up in a van and take four chairs and a desk away, and be super grateful," Fletcher says.

Once Fletcher has audited all the items – everything from paperclips and chandeliers to packets of biscuits and printers – she works with the security and IT department to make sure there are no breaches of data; any paperwork that should be shredded or isolated is taken care of.

She then goes about finding the best next destinations for the unwanted goods, which can require her to think outside the box.

"Say I've got 500 plastic in-trays that are used for stacking paper in, they might go to a festival to build a sculpture or something like that," she says.

Corporates, Local Authorities and the NHS can also use an online commercial platform called Warp It, which enables them to offer the items among themselves before they give away their unwanted assets.

Fletcher collaborates across all sectors to provide solutions to the waste problems that affect us all. She regularly runs Tech-Takeback pop-up shops where people can bring their unwanted electronics along for free data wiping. If it's reusable, Fletcher uses her network to find them a new home.

She says: "A whole variety of precious metals and soon-to-be scarce resources are in electronic and electrical devices so it's a very good kind of product to be making sure that they're not sitting around doing nothing and to make sure that they don't go to incinerators to be burnt or buried in landfill."

Attitudes towards waste are starting to change.

"When we opened the Waste House in 2014, people still thought that we were a bit kooky, whereas now we're being absolutely fully embraced as way ahead of the game," Fletcher says.

She acknowledges that this has been helped along by the airing of the TV series Blue Planet II in 2017, which showed millions the damage that plastic is causing to marine wildlife.

Fletcher's next plan is to buy a secondhand mobile library van to bring Tech-Takeback events to places that are more difficult to get to.

"If you can make it fun that's great, but a lot of the magic comes about when you just make these services really easy and convenient – people just jump on it."