A national cleaning company has been fined £175,000 after a hospital porter was killed by an industrial waste compactor in Bolton. 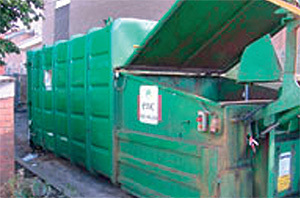 A national cleaning company has been fined £175,000 after a hospital porter was killed by an industrial waste compactor in Bolton.

Peter Bonomy's neck was broken when the lid on the large metal container slammed down on him at the Royal Bolton Hospital in Farnworth in 2006. His employer, ISS Mediclean Ltd, was prosecuted by the Health and Safety Executive (HSE) after an investigation found the company had allowed porters to load the waste compactor in an unsafe manner.

Manchester Crown Court heard the 58-year-old from Little Lever in Bolton had been collecting waste cardboard from around the hospital on Sunday 8 October 2006. He was found by a colleague with his head and arms under the lid of one of the compactors.

The HSE investigation concluded that the most likely explanation for Mr Bonomy's death was that he leaned against a lever while leaning over the waste compactor, causing the lid to snap down.

The manufacturer's recommendations for the compactor stated that it should be loaded from the front, away from the controls, but the court was told it was standard practice for porters to load it from the side.

Mr Bonomy, who was a keen fisherman and member of the Little Lever Conservative Club, had been employed by the company since July 2005. He had recently returned to work after taking time off to nurse his wife through terminal cancer before her death.

Tony Slade, one of Peter's closest friends, said: "Peter was a friend of mine for over 15 years. After his wife died, he came on holiday with me and typically volunteered to do some repairs in the apartment that my wife and I own in Spain. "He was a quiet, unassuming man. Members at the local Conservative club still refer to where he used to sit as 'Peter's chair', and he is remembered with cheerful affection.

"His friends will take consolation if his death spurs companies to ensure that such incidents do not happen again." ISS Mediclean Ltd, part of the ISS group which employs more than 43,500 people around the world, pleaded guilty to breaching Section 2(1) of the Health and Safety at Work etc Act 1974 after failing to provide a safe system of work for its employees.

Speaking after the hearing, HSE Inspector Rose Leese- Weller, said: "This is a tragic case which led to the death of man who had only returned to work just over a year earlier following his wife's death from cancer.

"Peter Bonomy's employer, ISS Mediclean, should have done more to make sure he and his colleagues were using the waste compactors safely. The lids snapped down instantly when the levers were operated so he had no chance of getting out of the way.

"The industrial waste compactors clearly had the potential to put lives in danger so the company should have carried out a proper risk assessment to make sure its employees stayed safe."
MORE FROM THIS COMPANY