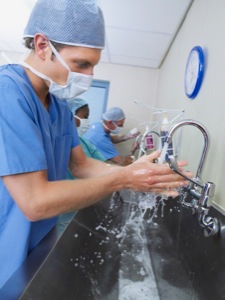 Ben Gummer MP, Parliamentary Under Secretary of State for Quality in the NHS, responded to the debate, which took place on 13th January, setting out the Government’s position on this matter.

During the debate, Nigel Mills MP requested that the Government look at how to ensure that proper checks are introduced to provide patients with confidence that everything is being done to enforce proper hand hygiene best practice within hospitals across the NHS, to keep patients safe and prevent them acquiring HAIs (healthcare acquired infections).

According to data from 2011, patients in England have a 6.4% chance of contracting an HAI. This manifests in more than 300,000 patients developing HAIs every year, 5,000 of which result in mortality. The impact of HAIs are not only physically damaging, but financially also – it is estimated HAIs add £1bn to the NHS bill annually.

It is thought that more than 30% of HAIs could be avoided simply through better application of existing knowledge and realistic infection control practices, which would save lives and prevent unnecessary and prolonged hospital stays.

Following the debate, Nigel Mills MP said: “The statistics highlight that more needs to be done to tackle HAIs in the NHS, I was therefore glad to raise this issue with the Minister and I am encouraged by his response.

"I am pleased that he now plans to raise issues surrounding public engagement with the Chief Medical Offer, Dame Sally Davies, and I welcome his commitment to encouraging Trusts to look at how to better capture data on hand hygiene to ensure quality improvements in patient safety.”

The Minister responding to the debate, Ben Gummer MP said: “[Compliance] is a very interesting area, and I would encourage local trusts to look at it in detail. The CQC has it as one of its main targets and, in the new inspection round, which will come very soon, it will want to look at the area as a central part of its monitoring.”