Evans Vanodine is honoured to have been named as a winner of a Queen’s Award for Enterprise – recognised as Britain’s most coveted prize for business success. 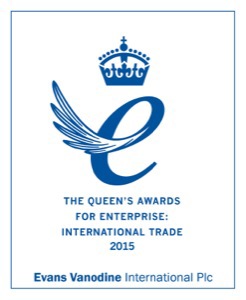 The award has been received in the category of International Trade, recognition of its outstanding overseas sales growth over the last three years.

The company currently exports to 72 countries worldwide, with a further 10 countries serviced by licensed manufacturing units overseas. Over the last three years new sales territories have been added, such as New Zealand and South Africa.

The awards recognise outstanding achievements by UK companies in three categories: International Trade, Innovation and Sustainable Development. Announced annually by HM The Queen, a special presentation is made to each company by The Lord-Lieutenant of the County at an official ceremony. Representatives from each winning business are also invited to attend a reception at Buckingham Palace. Previous winners include Jaguar Land Rover, JCB, Dunlop, Johnson & Johnson Medical and the Tangle Teezer, as featured on Dragon’s Den.

Peter Thompson, international sales manager, said: "Winning a Queen’s Award is a testament to the efforts of the entire company to be the best in our field. Development of our international business is an essential cornerstone on which the future of the business is built and this award is confirmation that we are successful in our efforts to operate on a global scale."