A window cleaner has been ordered to pay £2,000 for health and safety breaches after he was caught on camera working on a 40ft high ledge without a safety harness… 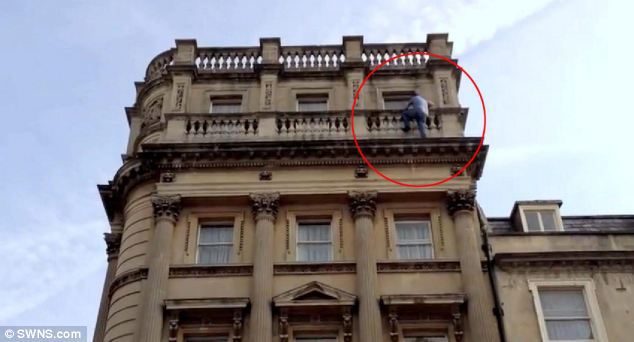 Wayne Mallon was caught on video camera by a passing pedestrian as he climbed out of the window to carry out his work 40ft above the pavement. He stepped onto a stone balustrade before edging his way around the building.

The video later shows him reappear on the level below, walking along the top of the narrow windows - again without any kind of safety equipment.

The incident took place on the windowsills above the Loch Fyne restaurant in Bath in September 2012.

The video of his antics was published on YouTube, where it attracted nearly 90,000 views.

The clip came to the attention of the health and safety team at Bath and North East Somerset Council, which brought charges against Mallon and Loch Fyne.

A spokesman from B&NES Council said: 'The council, in common with the window cleaning industry, takes these issues seriously because of the dangers to the public and workers.

'Whilst working in this manner, Mr Mallon was putting not only his own safety at risk but also that of members of the public who were passing on the busy pavement below.

'The council hopes that the fine and court costs of £2,000 incurred by Mr Mallon will deter businesses from putting themselves, other workers and members of the public at risk.'