What kind of wipers can tackle grease, grime and ingrained soiling? SCA product and segment manager Amelia Baker looks at the types of wipers that have been designed for use in a particularly dirty environment - and what makes them up to the job 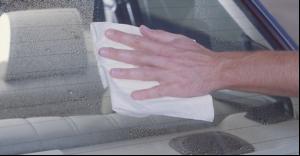 What kind of wipers can tackle grease, grime and ingrained soiling? SCA product and segment manager Amelia Baker looks at the types of wipers that have been designed for use in a particularly dirty environment - and what makes them up to the job

Dirty industrial environments are much less common these days than they were in the past.

Our increasing reliance on computers and automated processes means that many operatives no longer need to get their hands dirty. Traditional print shops and pressrooms have been replaced by digital printing centres, while manual cleaning has been replaced by inline cleaning systems in many factories.

But in a large number of industrial environments - such as garages and mechanical engineering workshops - dirt is still ever-present.

And this means that despite the technological breakthroughs of the twenty-first century there is still a requirement for heavy-duty wipers to carry out tough cleaning tasks.

Interestingly, today's wipers have become cleaner and more efficient in line with the processes for which they are required. For example, dirt and grease on the shop floor were once cleaned away using a rag that would be kept in the operative's pocket. But rags were never a very efficient solution.

For one thing, a typical mixed bag of rags would contain various types of discarded clothing including non-absorbent synthetics, underwear, stained garments and clothing with zip fasteners that could scratch the wiping surface. Some rags could also be soiled or contain contaminants that would interfere with the cleaning process.

So choosing a rag from the mixed bag was a matter of pot luck - unless time was spent sorting and grading the rags first, which would be highly inconvenient and have an obvious effect on shop floor productivity.

A ragbag is also impractical by means of its sheer size. A typical ragbag weighs around 10kg which means it would probably need to be placed in a central location on the factory floor. Operatives would then have to make the trek to the ragbag whenever they needed to clean up a mess - a task that would use a great deal of productive time. Meanwhile, the spill on the floor would potentially represent a slip hazard for other staff.

Health hazard Solvents are often required for tough cleaning jobs in factories, too, and since rags come in a wide variety of materials their absorbency capabilities differ greatly. Some rags will soak up the solvent but then retain it within the cloth instead of releasing it back on to the wiping surface. But solvent-soaked rags left lying around the workplace can represent a health hazard since solvents have been known to cause industrial dermatitis and breathing problems.

And when left in the trouser pocket for long periods of time, a solvent-soaked rag represents other risks for the user since the practice has been linked with testicular cancer.

So due to the inefficiencies of rags in factory settings, disposable wipers have gradually been replacing them. These offer a number of advantages: for example each wiper is clean, ready to use and fit for purpose. Disposable wipers also take up less space and are easier to position and manoeuvre. For example, Tork wipers come in roll form in the W1 Tork Performance floorstand which has wheels to allow it be moved wherever it is required, while the W4 Tork Performance wall unit is a compact dispenser that contains flat-packed cloths to save space.

Any wiper used for tackling a particularly dirty job needs to offer a high level of strength and durability. It also needs to be strong enough to clean irregular surfaces using solvents without breaking up.

Today's non-woven wipers have been engineered to offer durability and strength, even when used with solvents.

The wiper is also sufficiently bulky to be used on metal surfaces without injuring the hands, while its textured surface enables it to easily remove stubborn spots and grease.

Also suitable for tougher jobs is Tork Premium 530 which is highly efficient at absorbing solvents and then releasing them again afterwards so that less solvent is retained in the cloth. The wipe is also sufficiently bulky to provide protection for the hands during use on rough surfaces.

Sometimes substances such as dirt and grease need to be cleaned away from intricate parts and components in the workshop. Here a tough, absorbent wiper will be required - but one that is also soft enough to be crumpled up and used in corners and fissures. For this purpose we offer Tork Premium 520 which is both pliable and strong.

Where oils and grease need to be removed from surfaces such as floors and workbenches, Tork Advanced 440 works well since this tough, three-ply cellulose wiper has been developed specifically for use with high viscose oils and lubricants.

Besides these specialist cleaning cloths it is helpful to have some general-purpose wipers at hand in a dirty environment.

Industry may be evolving all the time but "dirt" will never be completely eradicated from the factory floor. For this reason a continual supply of strong, durable wipers purpose-designed to clean away industrial soiling there will make working life easier for the industrial operative.
MORE FROM THIS COMPANY