Home >Sustainability in the spotlight at BCC annual conference
ARTICLE

Sustainability in the spotlight at BCC annual conference 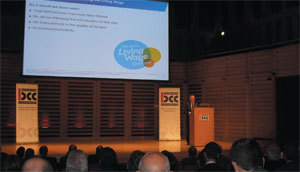 Snow reflected on his long and illustrious career in journalism, telling attendees of his experiences during his numerous meetings with political figures over the years, from Margaret Thatcher to Idi Amin and Jimmy Carter.Snow also explained why green and ethical living is personally important to him, his belief in the importance of cleanliness and hygiene and his love of sustainable transportation.

Also addressing the Conference was Daniel Finkelstein, Executive Editor of the Times, who offered his analysis of the current political climate and an economic outlook over the life-span of the coalition.

After comparing the Liberal Democrats torrid past year, which has seen their poll ratings slump and membership fall, to the humiliating hazing process endured by prospective fraternity members at American Universities, explaining that they would now value and cherish their partnership within the coalition more as a result of their ordeals.He also added that he was "very pessimistic" about the economic climate in the next three years, which will see a decline in living standards, a squeeze on public services and rising unemployment both in the UK and internationally.

This was a situation which was unavoidable, in Finkelstiens view, and the "new normal" of austerity is something we will all become more accustomed to.

Guy Stallard of KPMG then took to the stage to address delegates on the value of the living wage, a pledge which employers can sign up to to ensure that their workers are paid a fair wage- in London this is currently set at Ã‚£8.30 an hour.KPMG are one of the first of the 100 employers in the capital who have now joined the campaign, with Stallard explaining the benefits his organisation has reaped since its inception in 2006. He listed a 50% reduction in staff turnover, a huge increase in productivity and, with better sickness and holiday pay, absenteeism also saw a dramatic fall.

Stallard added that it brought about a different attitude to the security guards and cleaners on its premises:"We regard them in the same way as everyone else who works at KPMG.They might be the first person you see when you come into the building."

When challenged that the living wage had a detrimental effect on employers ability to take on apprenctices, Stallard stated that apprentices were exempt from the policy, but conceded that a better job could be done by the policy's proponents of communicating this caveat more effectively.
MORE FROM THIS COMPANY