Cutting down the cost factors

Disposables UK will again be at Interclean Amsterdam with a custom built display that showcases the Bay West range of coloured washroom dispensers. 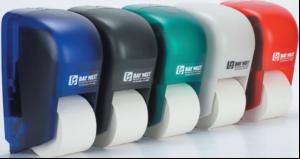 Disposables UK will again be at Interclean Amsterdam with a custom built display that showcases the Bay West range of coloured washroom dispensers.

Bay West Europe is part of the Disposables UK Group and products are manufactured at the company's north of England factory, ensuring easy supply to anywhere in europe.

To save on over use after hand washing - one of the biggest washroom cost factors, and the cause of many overflowing waste bins - the Bay West hand towel dispensers deliver a measured amount of paper to every user.This avoids the user simply tugging at a thick wad of exposed paper towels, few of which will actually be used for hand drying, but will all end up in the bin. Should the user require additional towels they are readily available from the dispenser, but rarely taken, as the dispensed sheet is usually adequate.The user does not have to pull a lever or press a button with wet hands, so the chances of cross contamination are reduced.