Northwood Hygiene Products make a fist of it!

If you know you need 300 wiping rags, or 400 or 500, why is it that you can’t order that number? Because in spite of the industry’s efforts, bags of rags are still sold by weight, not by the number of wiping rags. That’s because they are all a little bit different. Not always massively so, but definitely different. 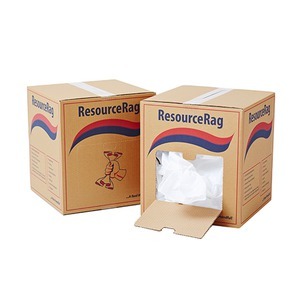 So consistent actual numbers of wiping rags in a pack are difficult to deliver and whilst the efforts made to standardise the product has resulted in closer approximations, they are still approximate numbers. Who cares? Well the underlying reason for this situation is that the rags are indeed different, which means that their performance differs from rag to rag.

This is not just about product contamination from zips, clips and buttons capable of causing surface damage, but to the rag’s specific performance in relation to its absorbency, lint content, reaction to chemicals etc. It means increased operative time is needed for sorting in order to check the rag, adapt and adjust to its performance rather than merely picking a woven or non-woven wiper with consistent qualities that make the wiping task the simple task it should be.

Talking of operative time, bags of rags are not always the easiest thing to move around. Modern boxed wiping dispensers are much more portable so can be placed conveniently where needed without the necessity for the operatives to retrace their steps every time a new rag is required. Further, because wipers are much lighter in weight than bags of rags, they also offer savings in freight, storage and disposal costs.

And yet…bags of rags continue to be sold, even though these apparently convincing economic advantages would suggest that this is some way from being the very best management solution. So why? Well for sure custom and practice comes into it. In areas where there is no real need for specialist wiping, what has worked satisfactorily in the past often simply does not excite sufficient interest to make evaluating alternatives any sort of priority even thought it might make a direct positive contribution to the bottom line.

There is however, another reason why some companies are resistant to change from rags to wipers and that is fear of an adverse reaction from the operatives themselves. In research conducted by Northwood Hygiene Products they discovered that beyond a perhaps to be expected somewhat conservative reaction to any change, there was the real issue of the handful perception. It was shown that in many instances operatives believed that unless the wiper had sufficient bulk it could not and would not perform the wiping task as well as a piece of rag. There were serious concerns that insufficient bulkiness could result in skin abrasions when wiping uneven surfaces, but mainly it was that if the wiper didn’t feel right in the hand it couldn’t do the job properly whatever the evidence to the contrary.

In response Northwood launched Resource Rag to meet that specific area of operator concern and provide a genuine alternative to white wiping rags. With all the expected quality wiper features of consistent size, chemical free and absorbent (up to six times its own weight!) with great strength wet or dry and low lint, it has the added benefit of being a true handful of a product, making it an even more realistic competitor to bags of rags. So economically beneficial and with greater operative appeal, surely it is time to at least try the Resource Rag alternative. It could save you a lot of money.