Cleaning firms that employ illegal workers will be hit with "the full force of government machinery", immigration minister James Brokenshire has warned. 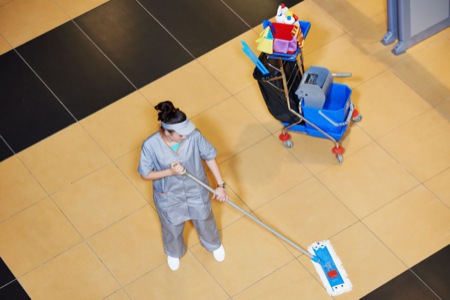 The government has announced a "new approach" to "rogue employers" who provide a draw for migrants by employing them without doing the proper checks that they are legally allowed to be in the country.

To create a 'hostile environment' for illegal migration, it is understood that enforcement officers will conduct hundreds of raids this autumn. Three sectors of the economy – cleaning, construction and care – will be targeted.

Speaking to The Times, Mr Brokenshire said: "Rogue employers who give jobs to illegal migrants are denying work to UK citizens and legal migrants and helping drive down wages.

"Experience tells us that employers who are prepared to cheat employment rules are also likely to breach health and safety rules and pay insufficient tax.

"That's why our new approach will be to use the full force of government machinery to hit them from all angles and take away the unfair advantage enjoyed by those who employ illegal migrants."

A London School of Economics study estimated the UK had 618,000 "irregular" residents, but campaign group Migration Watch said the figures is closer to 1.1 million.

Employers can be fined up to £20,000 per person for employing illegal workers. Employers who knowingly employ an illegal worker can be jailed for up to two years.

British Cleaning Council (BCC) Chairman Simon Hollingbery said: "We have been working with the Home Office Immigration Enforcement team for a number of months on this issue and welcome this proposed action."

Sarah Burton, assistant director of immigration enforcement in West London, promised there would be more help for those cleaning contractors that do stay within the law, but said that the time was now right to get tougher with those that don’t.

She said: "We want to work with the cleaning industry to assist those employers who want to do the right thing and employ only those that are allowed to work, but perhaps need more support in doing so. On the flip side of that we want to tackle those employers who deliberately flout the rules and have no intention of complying."