With the Rugby World Cup due to kick off in September, Charlotte Boniface from Tork manufacturer SCA looks at the types of systems that need to be installed in a stadium washroom to ensure minimal queuing and maximum hygiene 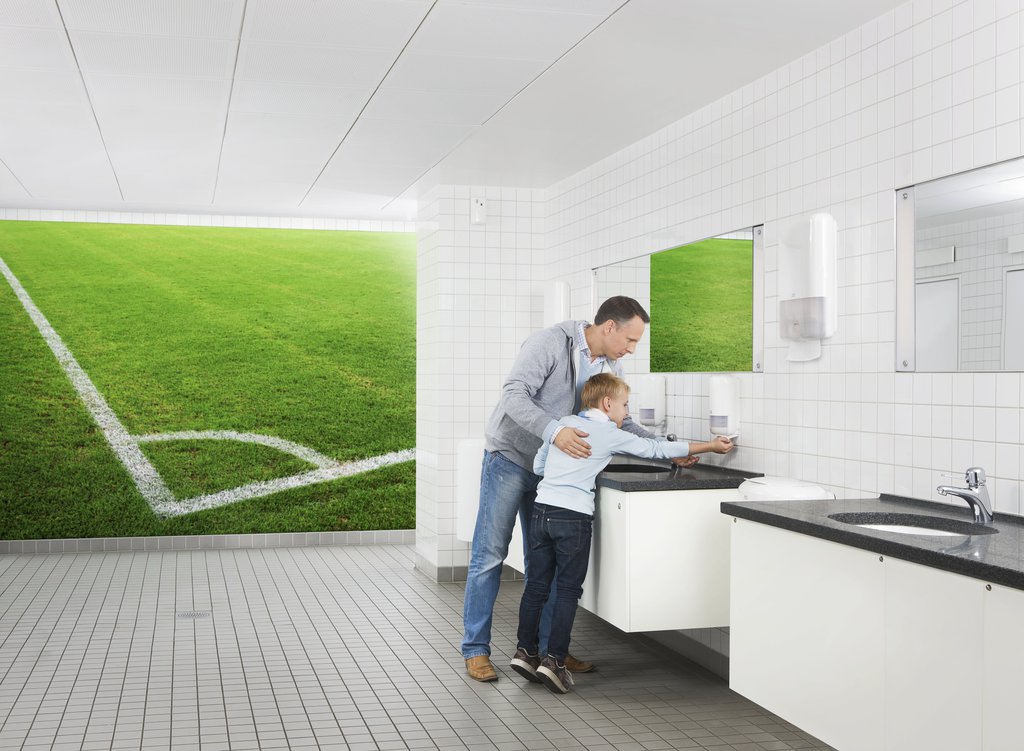 On September 18 England will meet Fiji at Twickenham Stadium for the opening match of the eighth Rugby World Cup. This will be the first time that England has been the sole host of the prestigious event.

According to professional services firm Ernst and Young the series will attract up to 466,000 international visitors – more than in any previous Rugby World Cup. These fans will provide a huge boost to the economy in terms of ticket sales, match day entertainment and visits to attractions. In fact they are expected to spend up to £869 million during the tournament.

Meanwhile, the event will showcase the nation as a worthy tourist destination that will go on to attract further visits. After the 2011 Rugby World Cup in New Zealand a total of 93% of visitors vowed to return to that country.

The England event will be held in 11 cities and work is under way to upgrade the participating stadiums. Twickenham is to receive a £75 million facelift, for example. But how much attention will be paid to the toilets?

A recent SCA survey of 1,000 people revealed that 75% were unhappy with the cleanliness of stadium toilets in general. According to the study, 44% avoid using stadium loos altogether while 20% deliberately refrain from drinking in stadiums – a practice that can have an impact both on visitor health and on concession profits.

And according to at least one sports fan there is scope for improvement at Twickenham. A 2013 Tripadvisor review of the stadium read: …."The atmosphere inside the ground should not be an opportunity to miss, it makes the day. Bars, food outlets and pre match entertainment are good – but the toilets are a let-down, insufficient in number and not that clean."

It is not easy to prepare stadium toilets for thousands of people who will all want to use the facilities at once. But a dirty washroom with insufficient provision of toilet paper, soap or hand-drying facilities will create an adverse impression on the visitor and may even influence their view of the nation.

Hand washing and drying facilities are particularly important in stadium washrooms since the potential for cross-contamination is high. Many spectators pay a visit to the food concession on their way back from the washroom, for example. They will then buy items such as sandwiches, burgers and hotdogs that all need to be eaten with the hands.

Soaps should be easy to use and housed in high-capacity dispensers to prevent the supply from running out during busy periods. The Tork Elevation Liquid Soap Dispenser, for instance, contains 1,000 shots per refill which means it is particularly suitable for high-traffic washrooms.

Queues will quickly form where air dryers are used and this will cause bottlenecks. It will also lead to hygiene issues since many visitors will simply leave their hands damp, which facilitates the growth of bacteria. Disposable hand towels are a better option since these take only a few seconds to dry the hands. A long-lasting system such as the Tork Advanced Hand Towel Roll works well since it gives out towels one at a time. This means consumption is naturally reduced which prevents the product from running out too quickly.

Similarly the Tork SmartOne Toilet Tissue system will help to prevent supply shortages because it reduces toilet tissue consumption by up to 40%. The dispenser naturally limits the amount of paper each user takes out. Besides reducing consumption this also reduces the risk of toilet blockages and 'out-of-action' cubicles.

At the 2011 Rugby World Cup in New Zealand, the traditional 10-minute half-time break was extended to 12 minutes to alleviate the crush caused by fans heading for the toilets and snack bars.

Whether England’s Rugby World Cup breaks last for 10 minutes or 12, well-stocked stadium washrooms that are both hygienic and well run will add to the overall impression of streamlined efficiency that we hope our international visitors will take away with them.