Following an outbreak of Clostridium difficile (C. diff), a fleet of robots are deep-cleaning the hospital wards of north Wales, the BBC reports. 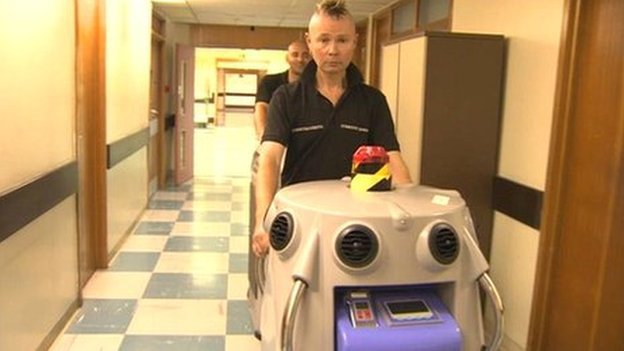 Resembling the Daleks in the TV series Dr Who, the robots have been brought in by the Betsi Cadwaladr health board as part of a structured cleaning plan to try to reduce the number of infections at its hospitals.

The board apologised in 2013 for their failure to control C. diff at Glan Clwyd hospital in Bodelwyddan. However a follow-up report says the number of infections is "still too high".

The report, which looked at the changes put in place in management, organisation and practice, said that hospitals in north Wales are making progress in reducing infections but more work is needed. In response, cleaning staff have changed the products they use and their techniques, with the deep cleaning robots now part of a coordinated programme to combat infection.

Tracey Cooper, assistant director of nursing for infection prevention, said: "It isn't rocket science, but it is about getting everything consistently in place for every patient every time. I think as a health board we've made tremendous progress since this time last year."

She added: "If you look at the numbers of infections, they've approximately halved from where they were. But that's not good enough."

BBC Wales was given access behind the scenes at Ysbyty Gwynedd hospital in Bangor to see the cleaning techniques used. It reported that hydrogen peroxide vaporiser machines are now in use at all three of the health board's main hospitals at Wrexham, Bodelwyddan and Bangor. The robots work by filling an empty and sealed ward with hydrogen peroxide vapour to exterminate any infections that remain after cleaning.

Prof Brian Duerden, emeritus professor of medical microbiology at Cardiff University, was asked to lead the independent expert review of infection controls, and to recommend improvements. He found there had been "significant progress" since 2013 but added "this is not to say that all is in place and that the job is done".

He said the healthcare associated infections (HCAI) rates are "still too high when compared with elsewhere in Wales and comparators in England". He added: "The reduction in numbers needed to reach the Welsh government targets is still a very significant challenge."

The findings will be discussed by hospital managers on Tuesday (5th August). They will also meet to consider what more needs to be done in the fight against bugs such as C. diff and MRSA.