Axis Cleaning and Support Services, the nationwide supplier of commercial cleaning services, has scooped an armful of both gold and platinum awards in the 26th annual Loo of the Year awards, dubbed the ‘Toilet Oscars’. It was also shortlisted in the Golden Service Awards. 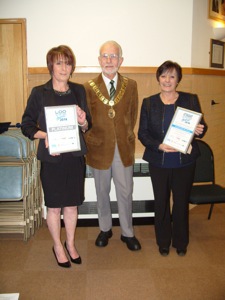 In the Awards, which judge the very best washrooms in the UK, no fewer than five of Axis Cleaning and Support Service’s customer sites were recognised with gold and platinum awards. The company entered awards in the retail, shopping centre, local authority public toilets, museums and galleries, as well as both commercial and public office categories.

Howard Perkins, the Town Clerk from Wellington Town Council says the Axis Cleaning and Support Service’s employees have made a real difference to the Wellington Town Parade Toilet Block: "The toilets are of a very high quality as a result of the hard working members of staff,” he said.

Two of Axis Cleaning and Support Service’s customer sites, the Victoria Shopping Centre in Southend on Sea and Harlow’s Harvey Shopping Centre entered themselves into the Loo of the Year Awards independently and were both awarded with platinum awards.

Axis was also shortlisted in the Golden Service Awards 2013 in the ‘Healthcare Establishment with fewer than 250 beds’ category, where Axis was recognised for its work at Moor Park Health Centre in Blackpool. Despite not winning, making the shortlist demonstrates the emphasis that Axis Cleaning and Support Services places on customer service.

The shortlisting was as a result of a site visit to Moor Park where the efforts of Sue Mellor, Axis’ Moorpark PCT supervisor, who was also shortlisted for the Site Supervisor of the Year award, were shown to be exceptional. Sue is responsible for the service delivery on the site and also communicates daily with the local FM team to ensure issues are responded to promptly. The result has been that the site regularly achieves an audit score of 95% and is marked as ‘excellent’ by the external NHS auditor.

Stuart Buswell, managing director of Axis Cleaning and Support Services, is delighted with the recognition the company has received: "We had a great 2013 and our success is a result of our hard-working employees. I am looking forward to building on this success in 2014 and beyond.”