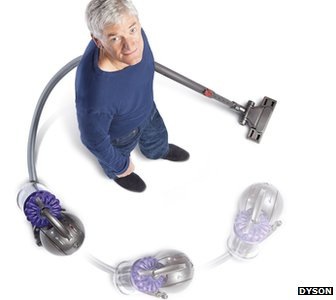 The British engineering company, which also pioneered "blade" hand dryers, has accused Samsung of copying its technology in the steering system on its latest vacuum cleaner.

Dyson said Samsung's Motion Sync vacuum cleaner used technology found in two Dyson appliances, the DC37 and DC39, which have been on the market for two years.

"This looks like a cynical rip-off," said Sir James Dyson, the firm's founder. "Samsung has many patent lawyers so I find it hard not to believe that this is a deliberate or utterly reckless infringement of our patent."

Samsung dismissed the claims as "groundless".

Dyson launched proceedings in the high court at the end of August. "We have been forced to issue proceedings in the English High Court, but I would much rather invest in research to develop new technology than have to sue," said Dyson.

Dyson first filed a patent for its steering mechanism in 2009. It describes a way to allow the device to rapidly spin quickly from one direction to another on the spot, and to follow the user's path rather than just being dragged behind, in order to prevent the vacuum getting snagged on corners. It said the system took three years to develop and has since been used in two of its models.

Samsung's marketing materials for its new vacuum cleaner specifically highlight the "revolutionary" design of its swivel body machine saying it "makes swift motion for sudden turns much easier". The firm rejected the idea that it achieved this by copying Dyson.

"The Samsung Motion Sync is an outcome of our own extensive research and development," added a spokeswoman. "We will take all necessary measures, including legal actions, to protect our technological innovation against Dyson's groundless claims."