Boxing clever in the washroom

Consumables such as toilet tissue,soap and hand towels are essential in any washroom. 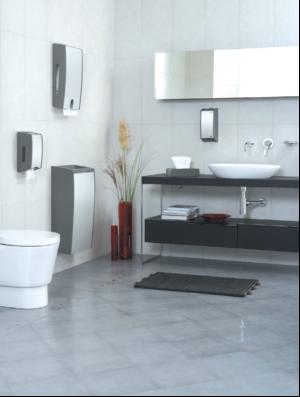 Consumables such as toilet tissue,soap and hand towels are essential in any washroom.

But a good dispensing system is at least as important in order to control consumption, cut waste and reduce maintenance.SCA Tissue's Charlotte Branwhite explains how No washroom is complete without toilet paper, soap and hand towels.And facilities managers could be forgiven for assuming that such consumables are more important than the dispensers in which they are housed.


But the dispenser is an essential part of any washroom hygiene system. Not only does it protect the product inside, it also helps to control consumption while contributing to the clean, hygienic image of an establishment.


Take for instance disposable hand towels. Some washroom managers opt for leaving piles of paper towels on the sink units from which washroom users can help themselves. But the temptation is for people to take more than they need while their wet hands drip on to other towels and render some unusable.


These soggy, discarded towels then need to be cleared away by a cleaner, adding further to the washroom's running costs. So what is perceived to be a low-cost option is often actually more costly than using a dispenser.


Such problems can be overcome by installing a unit such as the Tork Elevation Hand Towel Roll dispenser.This gives out only one sheet of paper at a time which means the washroom user needs to make a conscious decision to take out more.The reduced consumption often lowers the overall cost compared with nondispenser systems while the tightly-sealed dispenser protects the paper from contamination before use.


Beware of hidden costs
When it comes to equipping a washroom with toilet tissue, conventional toilet rolls are often considered to be a low-cost option.


However, the "hidden" costs should be taken into account since toilet rolls can easily be contaminated, thrown around, pilfered or left on wet floors where they will become soiled and unusable.


Conventional toilet rolls are also used up quickly since they provide relatively low meterage per roll. Extra labour may therefore be required to clear up any mess and replenish the rolls, and there are added hygiene and user satisfaction risks to consider when small rolls run out.


Here again a good dispenser will solve these issues.Many toilet tissue dispensers have a high capacity and are lockable to prevent pilferage and vandalism, and the paper inside is protected before use.


In a medium to high traffic washroom, a high-capacity dispenser will save greatly on labour costs since the paper supply will have to be replenished less frequently. For example, the Tork Compact Auto Shift holds the equivalent of up to 11 small rolls in just two tightlywound rolls of toilet paper.When the first roll has been used up, the second roll automatically shifts down into position ready for use.The janitor then simply drops a new roll into the top of the dispenser during the next maintenance check.


A fitted soap dispenser will prevent the issue of pilferage while providing a hygienic soap supply. Our Tork Premium liquid soaps, for example, are housed in a sealed cartridge that gives out measured doses of soap to prevent overconsumption.


Besides their practical benefits,washroom dispensers can add to the overall ambiance of a washroom which will potentially enhance the image of an office, restaurant, hotel or other establishment.


The Tork Elevation range of washroom dispensers are designed to be both functional and aesthetically pleasing and the line has won two design awards since its launch in 2009.


Tork Aluminium dispensers, meanwhile, are designed to provide a stylish, upmarket look to enhance the washrooms in environments such as prestigious banks, offices, legal institutions and top hotels.


A washroom dispenser is therefore not simply a box in which to house the essential supplies inside - it is an integral part of any hand towel, toilet tissue or soap system.
MORE FROM THIS COMPANY