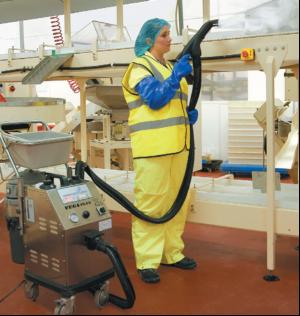 
The New McCowan's (Scotland), incorporating John Millar and Sons of Edinburgh, and McCowan's of Stenhousemuir is an independent manufacturer of traditional sweets and confectionery for all ages and occasions.

For over 100 years its brands such as McCowan's Highland Toffee, Millar Pan Drops,Millar Chocolate Limes,Millar Mint Humbugs,Millar Chocolate Eclairs,Wham Bars and McCowan's Bonbons have reached near iconic status for many adults who remember getting stuck into these mouth-watering (and jaw-sticking) delights as a child. As adults some of us are still enjoying them now.


However, one of the problems associated with being a major confectionery manufacturer is dealing with the clean-up of the many constituents of these sweets, including machine-clogging glucose and sugar.

Sticky residues on production machinery are hard to shift and although the company has used many methods over the years to remove them, each is rather tedious and difficult, especially as cooled sugars tend to harden.


Cleaning also causes a significant loss in production, as not only does the machinery have to be shut down for safety reasons, but as cleaning is manual, it takes quite some time to achieve the high standards acceptable before the machines can be started up again.

Following a site visit and evaluation of the problem, an OspreyDeepclean Vega Plus dry steam cleaning machine was recommended and successfully demonstrated on the production line.


Hot stuff
Since the Vega Plus was purchased the company has found that dry steam cleaning is much quicker, easier, and far more effective than manual methods,with machines being brought back into production sooner than ever before.


Generating dry steam heated to 1800 which is applied under constant 8 bar pressure, the Vega Plus quickly dissolves sticky residues which if not fully vaporised by the steam are quickly vacuumed into the waste tank for later disposal.The on-board 1200- watt wet and dry vacuum may be used independently to the steam cleaning process.


Not only production machinery, but any floor and wall spaces can be cleaned, and, due to the high temperatures involved, also sanitised, both quickly and effectively - especially important when dealing with foodstuffs.

The Vega Plus also has the facility to add chemicals, rust inhibitors or detergent to the dry steam at the point of use - an advantage in many industrial applications and for extra grease removing power if this is required.The operator controls the additives by means of a separate switch provided on the handle.

There is also a digital control panel for more precise settings and thus optimum operator control. With few surface-mounted knobs and indicator lights on its stainless steel body, the Vega Plus is itself easier to keep clean.


"This sale was one of our first in steam cleaning machines," says Craig Manson, sales director at Cleaning Systems UK,"but we had every confidence in this application as the contracting side of our business has also used these machines elsewhere to great success."
"There is no doubt that the steam cleaning approach to the endemic problem for a confectioner of removing sticky residues from machinery and other surfaces has brought huge time-saving and production benefits to our factory," adds James Buist, general manager at The New McCowan's (Scotland)."It also makes a major contribution to hygiene levels which we take very seriously here." The company has since ordered a second Vega Plus.
MORE FROM THIS COMPANY