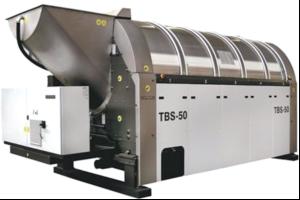 Until now smaller industrial laundries handling anything between 250 and 500kg per hour have been unable to compete effectively against larger operations equipped with continuous batch washers, says Girbau UK.

All that has changed with the launch of the company's new EcoTunnel System - a smaller, high efficiency five-compartment development of its TBS-50 batch washing system.

"A laundry looking to replace around six to eight high capacity washerextractors with the new EcoTunnel System can expect to cut energy use by as much as 80% and water consumption by 75%, as well as achieving much lower labour costs by eliminating manual handling tasks," says Peter Marsh, MD of Girbau UK."This level of savings can clearly have a hugely beneficial impact on laundry profitability as well as a spectacular reduction in environmental impact and carbon emissions."

Countering consumption The up to 80% reduction in energy consumption translates to a comparable reduction in carbon emissions which means laundries installing an EcoTunnel may qualify for an interest-free loan from the Carbon Trust. (Eligibility for Carbon Trust interest-free loans is limited to businesses with less than 250 employees and annual turnover below £50 million. Payback must be within one and four years and be self-financing from energy savings. For more details visit the Carbon Trust website www.carbontrust.co.uk ) The EcoTunnel drums uses thinner gauge, high-strength steel than other manufacturers, says the company, which enables Girbau to punch dish-shaped rather than flat-punched holes.This prevents sharp edges to the perforations causing markedly less abrasion and substantially longer linen life.

The whole package The EcoTunnel System comes complete with Girbau's engineering maintenance and technical support package which means laundries do not need a trained in-house engineer. Purchasers of a Girbau EcoTunnel System are allocated a dedicated Girbau engineer with detailed knowledge of every aspect of the system. Each system is also fitted with an automatic modem link to Girbau UK headquarters in Hitchin and the manufacturing plant in Barcelona, Spain. Girbau will constantly monitor the system and provide ongoing remote diagnostics, fault finding and preventative maintenance.

The first UK installation of a Girbau TBS-50 system, big brother to the EcoTunnel System, was earlier this year at tunnel washing pioneers Watford Launderers.

"The Girbau batch washer system is well suited to our needs here both in terms of the quantity and quality of work for our fivestar hotel customers," says Peter Ross, chairman of Watford Launderers and Cleaners.

"The flexibility of its design was also crucial in our choice as the floor space and headroom we had available for it are quite limited.

The Girbau system allows us to accommodate the system's dryers at a good height in order to facilitate easier unloading." The Girbau EcoTunnel System offers the potential to deliver energy, water, labour and cost saving benefits to laundries handling 250 to 500kg per hour including in-house operations of hospitals and larger hotel groups as well as textile and workwear rental operations.
MORE FROM THIS COMPANY