Water jetting and vacuumation carried out by Lanes Group plc operatives has cleared a large area of an engineering storage site of waste after drainage channels became blocked. 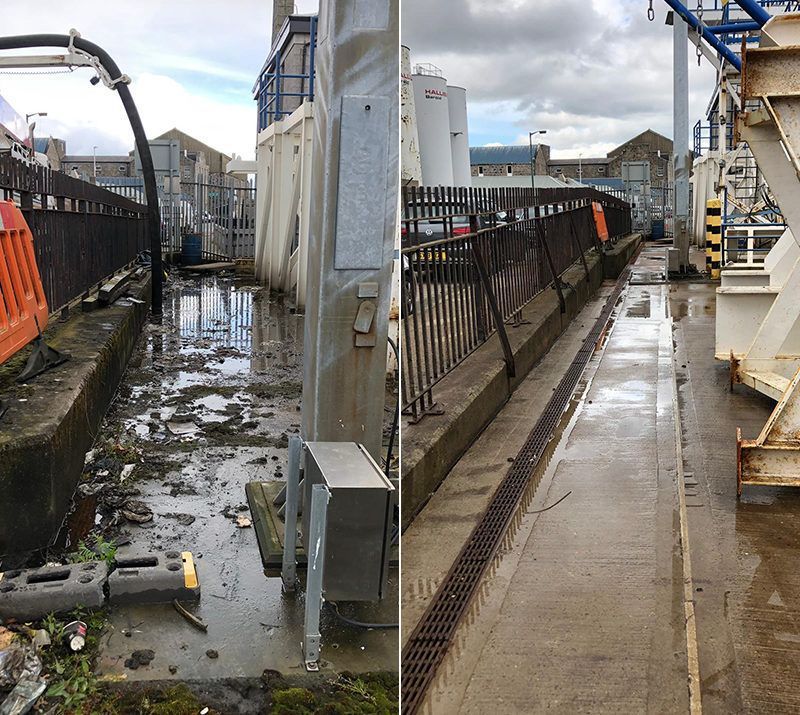 The industrial cleaning project was completed in less than a day, with an estimated five tonnes of waste and water taken away for safe disposal at an authorised site.

The engineering firm called in a team from the Lanes Aberdeen depot after finding a corner of its facility had become contaminated by regular flooding with wastewater.

A scoping survey indicated that a drainage channel linked to a foul drain had become blocked, causing water to back up, especially after periods of heavy rain.

Lanes Aberdeen area development manager Mark Morrice said: “Our client agreed with our advice that the blockage material should be treated as hazardous waste and removed with care."

This involved "deploying an industrial cleaning team using the appropriate personal and respiratory protective equipment alongside technology that allowed the waste to be removed remotely wherever possible".

Waste matter had built up where the area had flooded several times. There was a risk that particulate matter could present a health risk if it was disturbed and become airborne.

Therefore, during the clean-up operation, which took about six hours, the waste was damped down and the resulting liquid was vacuumed up by a Lanes jet vac tanker.

Once this was achieved water jetting could be used in conjunction with vacuumation to clear the surface water channels and underground drains along a 25-metre-long section of the site.

During the process, operatives wore full body suits, protective gloves and respiratory masks – while the site was carefully controlled to ensure no-one else could have contact with hazardous material.

Mark Morrice said: “Our use of water jetting and vacuumation ensured the risk of personal contact with the waste was minimised and the clean-up operation was completed as safely and quickly as possible.

“As a drainage specialist we can bring to bear skills and resources that can be applied to a wide range of industrial cleaning tasks, including industrial tank cleaning, surface cleaning, and structure decontamination.”