A 'ballot bin' that asks people to vote with their cigarette butts on questions displayed on the bin is one of the innovative methods being introduced to Manchester city centre in a bid to reduce the £7.5 million spent by the council every year on litter, fly-tipping and street cleansing. 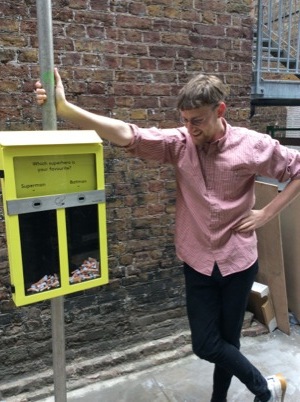 Residents, shopkeepers and business owners in Oxford Road and Oxford Street - one of the most littered areas of the city centre - have joined forces with the city's council to take action.

The council, traders and residents will rally together in the 'Trash Talk Oxford Street' anti-litter campaign which launches with a behaviour change project, My Street is Your Street, on Friday 10th June 2016.

Behaviour change charity Hubbub, which explores innovative ways to interest people in important sustainability issues, is behind the campaign It is hoped that the introduction of the ‘ballot bin’ or 'voting ashtray' will nudge smokers to discard their butts in an ashtray, rather than on the floor.

Another feature of the campaign will be a series of large posters in shop windows and on railings, featuring local people and encouraging others to take pride in their high street.

General manager of local restaurant Chilango Borja Monasterio said: “We all loathe litter but that’s not the only reason we want to stop this blight. Litter is bad for business but it’s really hard to stop people from doing it and quite frankly I don’t feel safe enough and don’t have the time to tell people to pick up their junk when they have just thrown it onto my doorstep.”

Recent research from Hubbub shows that people do not feel in a position to confront litter offenders - 57% said that they would be afraid to confront people who drop litter, while 45% say that they often end up clearing up other people’s litter.

Other results from the survey show that 81% of people in the north west say that seeing litter on the streets in their local area makes them feel angry and frustrated.

Trewin Restorick, Hubbub’s founder and CEO, said: “The My Street is Your Street campaign will test innovative ways to prevent litter, trying new interventions for the first time in Manchester. We will introduce new ideas and best practice from around the world and we’re delighted to have brought together this unique collaboration of organisations to tackle this important issue.”

Nigel Murphy, Manchester City Council's executive member for neighbourhoods, said: "Littering is a very serious issue for all major cities and we dedicate considerable resources to tackling the problem. We know that city centre businesses share our desire to do even more and we're confident that this new partnership will result in real change, using innovative ways of focusing city centre visitors' attention on the impacts of littering."