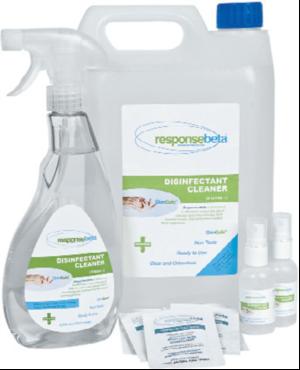 New Delhi metallo-beta - lactamase-1 (NDM- 1) is a gene carried by bacteria that makes the strain resistant to some of the most powerful antibiotics.

The Health Protection Agency (HPA) has stepped up warnings about the potential spread within NHS hospitals.

"The potential for a pandemic of antibiotic resistant infections caused by NDM-1 is real," says Ben Ludzker, MD of Kays Medical."Vigilance and best practice are obviously critical but we believe the findings that prove ResponseBeta can kill NDM-1 represent a breakthrough in infection control." ResponseBeta is an alcohol-free, broad spectrum biocidal formula which is scientifically proven to destroy viruses, bacteria, fungi, yeasts and spores. It was tested by an independent laboratory which is an Associate Member of Chartered Institute of Environmental Health Officers, an Associate Member of Royal Society of Medicine and a member of BSI (British Standards Institution) working group CH21.
MORE FROM THIS COMPANY
Send Enquiry
View Company Profile
RELATED ARTICLES