The AD (Air Disinfection Unit) from INOV8 Science was a winner of the NHS Smart Solutions 2009 HCAI Technology Innovation Programme Awards. It is now being used in New Cross Hospital, Wolverhampton to combat Norovirus 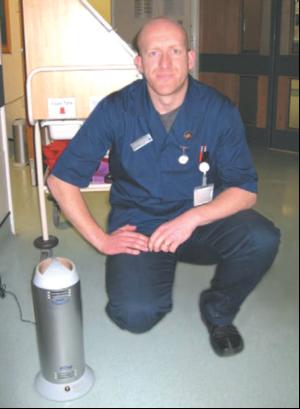 The AD (Air Disinfection Unit) from INOV8 Science was a winner of the NHS Smart Solutions 2009 HCAI Technology Innovation Programme Awards. It is now being used in New Cross Hospital, Wolverhampton to combat Norovirus


One of the largest hospitals in the Midlands has chosen air disinfection technology from Milton Keynes based company Inov8 to combat the threat of Norovirus,which is currently affecting hospitals across the country.


New Cross Hospital in Wolverhampton took delivery of 180 Air Disinfection (AD) Units in February for an initial three month rental to reduce the secondary spread of Norovirus across 14 wards, including intensive care and the emergency assessment unit.


The HPA reported 165 ward closures in England and Wales resulting from Norovirus outbreaks during the first 4 weeks of 2010. It is estimated that in epidemic seasons,Norovirus may cost the NHS more than £100m per year through ward closures, prompting many health trusts to take protective measures such as the installation of AD units.


Prevention better than cure
New Cross Hospital, which has 700 patient beds and treats more than 150,000 people annually, has just experienced its worst outbreak of Norovirus in eight years, with 466 patients and 237 staff affected.

"We contacted Inov8 and within two weeks the 180 units were installed and in use across the hospital. For us, a key benefit of the AD unit is that it is not necessary to vacate a room while it is on and the process can take place continuously without having to disturb patients and staff.


"Once the three month period is completed we will assess the situation and evaluate how the AD Unit has performed through this difficult time."

It's infectious
The AD unit emits a constant low level stream of hydroxyl radicals that are harmless to humans but which attack bacteria and viruses.

Measuring less than 41 x 20cm, the AD unit is a small device that is generally mounted in locations with the greatest potential for pathogen proliferation.


"Norovirus is highly infectious - it is caught by inhaling infected droplets from the air or through contact with an infected person or contaminated surfaces. Symptoms include sudden vomiting and diarrhoea, and a person remains infectious for up to 48 hours after their symptoms have finished," states Bob Elen, Inov8's healthcare specialist.


"As infection rates for Norovirus have increased over recent months, we have been contacted by many hospitals eager to learn more about how the spread of Norovirus and other infections can be reduced by the AD technology to avoid the necessity for ward closures.


"There are many types of Norovirus, and it is possible for infection to occur several times because, following infection, immunity to the virus only lasts for 14 weeks.Additionally,we have been informed that 18 in every 100 patient admissions carry Norovirus,making the infection a particular concern for hospitals.


"This air disinfection technology has been proven to be highly effective in both laboratory trials and hospital evaluations, so we are working hard to ensure that infection prevention and control staff are aware that there is a cost-effective solution to Norovirus that is quick and easy to install."
MORE FROM THIS COMPANY
Send Enquiry
View Company Profile
RELATED ARTICLES