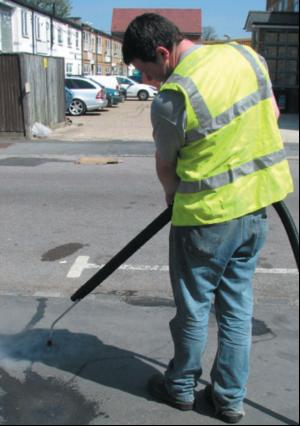 Launched in May this year the Spitfire SC is said to have become an instant hit with several Rail Network contractors tasked with deep cleaning dozens of inner London stations in preparation for the 2012 Olympics.The economically priced Spitfire SC dissolves chewing and bubble gum in seconds using an environmentally sound cleaning agent in conjunction with super heated steam.

1000s of metres of gum infested surfaces have already been cleaned with Spitfire claiming victory on paths, platforms and entrances in the major Rail Station clean up.

In July,Mayor of London Boris Johnson joined the battle and held a 'gum gala' in a bid to rid the capital of the sticky menace in time for the 2012 Olympics. "Gum detritus casts an unsightly stain on our beautiful city and scraping it off our streets is also a great drain on taxpayers ' money.

"I want visitors in 2012 to be welcomed to a sparkling clean capital, not be greeted by the sight of chewing gum blighted streets." Rebecca Joinson from Keep Britain Tidy said:"It's fantastic to see Boris Johnson leading the battle on chewing gum litter in our capital.

"Chewing gum is a major problem - not only in London but in towns and cities right across the country." A further 100 + Rail stations are due for the same thorough clean up in the next year and London based Omnipole is predicting more cleaning successes across the UK in the Spitfire's battle against Gum.
MORE FROM THIS COMPANY
Send Enquiry
View Company Profile
RELATED ARTICLES