The right wipes for workplaces 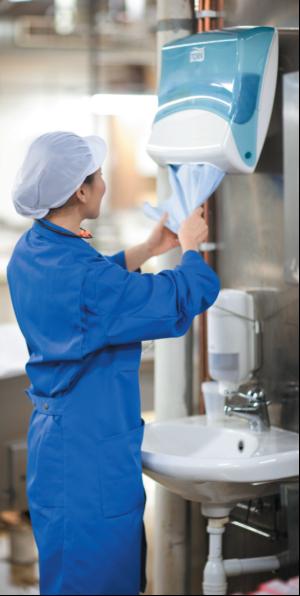 
Industrial wipers have an important role to play in the smooth running of a workplace.However,many managers underestimate them - at the expense of productivity.


Whenever there is a spill on the floor at home we understand the need to find a cloth immediately to wipe up the mess and prevent damage or slips. In industrial units and catering kitchens, staff may work regularly with chemicals, lubricants, cooking ingredients or fats which means a spill is more likely to occur. Also industrial workplaces are often large spaces so staff will probably have further to walk to find a wiper.


Before launching the new Tork Performance wiping system,Tork researchers paid a visit to various work environments and were staggered by the inefficiency of companies' current wiping systems.


On the loose
In catering kitchens we came across plastic wiper dispensers that had long since cracked, leaving the paper roll exposed to foodborne contamination.We also found loose wiper rolls on the kitchen counter where the trailing end was left to become contaminated with bacteria.


In the workshop, loose rolls were similarly deposited on the work surface. In one case an oil can had spilled and the lower half of the wiper roll had soaked up the mess, rendering the entire roll unusable.


In some cases we were told that loose rolls were currently in use, but were unable to locate any of them.

Presumably when a wiper was needed, staff were losing valuable work time hunting around the premises.


One wall-mounted dispenser was so difficult to load that staff had given up and were using it as a shelf on which to place a loose wiping roll. Another floorstand dispenser had teeth so sharp it represented a safety hazard.


Besides the inefficiencies and health and safety risks that these systems represented, they also made the premises appear chaotic, grubby and unprofessional.

What do workplaces want? We then asked customers what they looked for in a workplace wiping system.


After several years of development we came up with our answer in the shape of the Tork Performance range.All the dispensers come with mounting instructions and most have side-opening panels to make them easy to load.Centrefeed dispensers are available in two sizes and all dispensers are keylockable for vulnerable environments, with an optional push-button opening system for areas where pilferage is not an issue.The dispensers' strong plastic casing protects the wipers from contamination before use, and built-in 'gutters' inside some prevent any water from entering the unit.

Packages are often dropped from a pallet during delivery, frequently resulting in breakages. So after developing the Performance dispensers we repeatedly dropped them from a height of 1.5m to simulate falling from a pallet.After tests the dispensers remained intact.We then smashed the semi-transparent front of each dispenser repeatedly using 15J pressure blows - equivalent to a 1.5m fall - from which the dispensers emerged undamaged.


The durability of the wall brackets in which W4 dispensers are hung was tested by removing a dispenser from the wall and rehanging it 500 times.We then opened and closed our dispensers 10,000 times to check that the hinges on the side-opening panels functioned successfully.


Under pressure
To test the functionality of the seals and internal 'gutters',we trained shower hoses at pressures of 10 litres per minute on to the dispensers' housings. Only one or two wipers - those protruding from the dispenser - emerged damp from the test.


Finally,we simulated 10 years of giant roll use by continuously rotating the roll on to the teeth of its floorstand and checking that only minor damage was caused to the teeth.


The dispensers have been designed to improve workflow and cut costs by reducing waste, over-consumption and the time spent refilling them. Clean-cut wipers in the W4 dispenser are presented one at a time to prevent over-consumption while an optional 'brake' function in the W2 roll dispenser prevents too much of the wiper roll from being pulled out at a time.The new W1 floorstand saves time spent reloading since the spring-loaded spindle allows a giant wiper roll to be changed in seconds.


The eye-catching dispenser housings - which come in a choice of red/smoke or turquoise/white - make them easy to spot on the wall or floorstand which cuts down time spent looking for a wiper.
MORE FROM THIS COMPANY